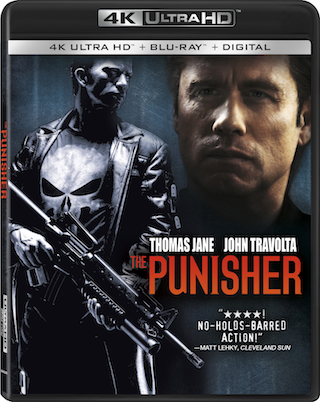 The 2004 Jonathan Hensleigh directed film “The Punisher“ starring Thomas Jane  and John Travolta is coming to 4K UHD Blu-ray on September 25th via Lionsgate. Tech specs for the release include full 2160p 4K video in the 2.35:1 aspect ratio and Dolby Atmos sound. Both varieties of High Dynamic Range, HDR10 and Dolby Vision will be included. The release will come in the form of a “combo pack” with a Blu-ray Disc, as well as a Digital Copy, of the film also included. The bonus materials set to be included on the release are listed below.

UPDATE: This is now available for PRE-ORDER over at Amazon.

Including Both Dolby Vision™ and Dolby Atmos®

Frank Castle vows vengeance when The Punisher arrives on 4K Ultra HD™ Combo Pack (plus Blu-ray™ and Digital) September 25 from Lionsgate. Based on Marvel’s iconic anti-hero, the film tells the tale of FBI agent Frank Castle’s unrelenting need for vengeance after his family is killed. Experience four times the resolution of full HD with 4K along with Dolby Vision HDR, which brings entertainment to life through ultra-vivid picture quality. When compared to a standard picture, Dolby Vision can deliver spectacular colors never before seen on a screen, highlights that are up to 40 times brighter, and blacks that are 10 times darker. The release also features Dolby Atmos® audio mixed specifically for the home to place and move audio anywhere in the room, including overhead. The Punisher 4K Ultra HD Combo Pack is loaded with special features and will be available for the suggested retail price of $22.99.

When his family is killed, FBI agent Frank Castle (Thomas Jane) vows vengeance and becomes “The Punisher” in this thrilling adaptation of the Marvel comic.

Will Patton Armageddon, The Postman

Roy Scheider Jaws, The French Connection, All That Jazz

Laura Harring Mulholland Drive, Love in the Time of Cholera

Ben Foster 3:10 to Yuma, Hell or High Water, The Messenger