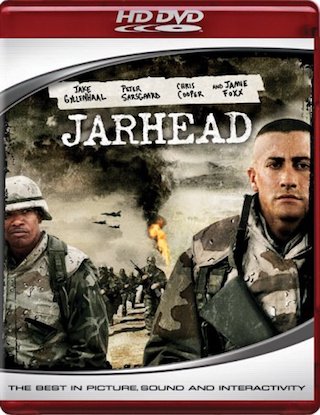 In the era we live in, the eventuality of a movie about war was going to come, whether or not we wanted to see the film. Since the war in Iraq is such a hot button topic with a majority of people, regardless if you were for the war or against the war, Universal thought this would be the perfect moment to capture our interest in war. Enter director Sam Mendes (American Beauty) and stars Jake Gyllenhaal (Brokeback Mountain) and Academy-Award winning Actor Jamie Foxx (Ray) and you know you have a movie that will pique the average person’s curiosity. But was Jarhead made too soon?

Jarhead is based on the 2003 memoirs of Anthony Swofford who is portrayed by Gyllenhaal. Swofford served in the first Gulf War. The film is obviously about a war, but what makes the film amazing is that it is a film that rises way, way above the concept of a war to tell an intriguing story of exhaustion, boredom, loneliness, obession and drama.

“Four Days, Four Hours, One Minute. I never shot my rifle.“ This is what Swofford tells us in his memoirs. The film is very realistic in that it contains no sudden act of heroism or big planned explosions. It almost feels like Mendes and his crew shot two hours of actual war footage. There are many scenes were we get nothing but dialogue. These scenes are done, I feel, to let the viewer take a moment to think about the concept of war and what it exactly means to go to war. We experience exactly what Swofford went through. The sand and heat of the desert, the torture of months and months of waiting and waiting, the sight of burnt corpses and the smell of burning oil fields.

Gyllenhaal is quite on the role lately. Recently nominated for his performance in Brokeback Mountain, he turns in another impressive performance here. One particular scene sees Swofford being interviewed by a network newswoman. She asks him why he decided to serve in the army. He gave her the typical answer, but shw wanted more. This causes him to say “I’m 20 years old, and I was dumb enough to sign a contract.” Troy (Peter Sarsgaard) plays Swofford’s spotter and Jamie Foxx plays Staff Sgt. Sykes, who tells us he serves for one reason and only one reason; He loves his kob. The rest of the team includes your average young men who want to figure the only thing worse than fighting an actual war, is waiting for the war to begin.. in 112 degree heat.

One of the most powerful scenes in the film occurs when Swofford sees an enemy officer in his gunsight. He is forbidden to fire because his shot may give advance warning of their position and of a possible air strike. Troy declares “Let him take the shot!” Possibly this means these soldiers are so frustrated with the concept of waiting and waiting for the war to start, that they want to actually start the war in a manner that may kill them by exposing their position.

I read an interesting thought on a message board a few days ago about Swofford’s life. He feels that, for the rest of his life, whether or not he ever holds a rifle again, the rifle he used will always be a part of his body and soul. He never thought it would be like this when he signed up. Swofford says a story from a different angle can change how we look at a picture and interpret its meaning. Jarhead, being based on his experience of war, certainly does this in a exuberantly passionate manner that hits very close to home.

The HD-DVD transfer of Jarhead maintains the 2:35:1 Aspect Ratio that appeared on the DVD release. Just like the original DVD release, the image keeps its sharpness, clarity and overall bright tones. While the DVD release did have a bit of grittiness and a few examples of edge enhancement in the desert scenes, the HD-DVD release was pretty much absent of any of this. The image was more defined with instances where you could see, I’m not joking here either, little flies buzzing around the head of Swofford all while Swofford sits and speaks. HD-DVD is the definite answer for any videophile. With Jarhead being one of the first released Universal HD-DVD titles besides Doom, the image quality, like many of their DVD releases, is exemplary.

We’re given a English Dolby Digital Plus 5.1 Audio Track for the HD-DVD release of this film. The surrounds are crystal clear with all defining action like tanks screeching by, bullets zooming out of a machine gun and soldiers yelling to each other. Booming explosions rock the sub with a much finer detail (I felt the regular DVD release of Jarhead almost worked the sub a bit too much, but Universal remedied this problem. The added Plus 5.1 Track definitely seems to be the way to go for HD-DVD as many little instances, like a person screaming in the background. If you have a receiver that is capable of doing up to 7 channels, try it out as the 5 channels I used were so amazing that I just wonder what the extra two channels could add. Universal is off to a fine start here.

Audio Commentary with Director Sam Mendes: Here we are given a nice, insightful chat by Sam Mendes. Mendes looks back on his desire to make the film, and his worry about releasing a film about a war when the war in Iraq is still on everyone’s mind.

Audio Commentary with Screenwriter William Broyles Jr. and Author Anthony Swofford: Now this is a great commentary track. Even though the information Broyles gives is interesting, Mendes mentioned a majority of what he said. It is Swofford who talks about his real-life experiences in the army and it really comes off through his language. This commentary is definitely worth your time, even if you don’t like the film as Swoffords‘ comments are very informative.

Jarhead Diaries with Introduction by Sam Mendes: In this feature, Sam Mendes informs us that he had a special group of extras work as behind the scene extras with the sole goal of making this extra. All of the extra’s were given cameras and told what to shoot and what to not shoot. I did enjoy that the extra’s enlightened us with their comments here.

Background with Introduction by Sam Mendes: Here Mendes informs us how he came about creating this feature. The actual feature focuses on all of the extra’s on the entire Jarhead film set.

Semper Fi: Life After the Corps with Introduction by Sam Mendes: This is a feature about Swofford and Laura Nix interviewing former marines and their re-integration into their normal lives after returning from the corps.

News Interviews in Full: Here we’re given a few interviews with the characters that were portrayed by Sarsgaard, Gyllenhaal, and others in the film.

“Swoff’s Fantasies: Here are we given whole sequences that were deleted from the final cut of the film. These are different from the deleted scenes, as these are scenes that Swofford wanted to have including in the final version, but were cut due to time constraints and lack of a continuous flow of the story.

Deleted Scenes: Here we are given a total of 11 Deleted Scenes that last around 19 minutes. While the scenes don’t really do much for the overall film, it is interesting to hear the aspects from Mendes on the optional commentary track as to why the scenes were deleted. Worth a watch if you feel like seeing every piece of possible footage shot.

Jarhead is a powerful, important film about a subject we all know but never want to experience. Luckily for us, Swofford brings us his experiences in a manner that is compelling and moving. The DVD version boasts great picture and audio and a whole host of interesting features. When it comes to deciding which version to get, only get the Collector’s Edition if you want more features. Whatever version you pick up, make sure you grab this movie and strap yourself in for a great time.