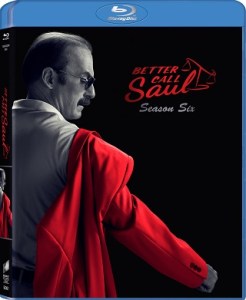 The tech specs for the sixth season include a 1080p HD video presentation in the 1.78:1 aspect ratio and DTS-HD Master Audio 5.1 lossless surround sound, spanning across a 4-disc set.  You can now find the sixth season Blu-ray available for preorder over at Amazon.  The bonus materials included with the season’s Blu-ray release are listed below.

MAJOR UPDATE:  It seems that a“Better Call Saul: The Complete Series” Blu-ray box set will definitely be coming to Blu-ray Disc stateside, but I’m still awaiting the full details from Sony.  However, you can now find The Complete Series on Blu-ray for preorder over at Amazon.  Stay tuned for further details soon, including artwork.

It is also certainly worth mentioning to UK [United Kingdom] readers that the Complete Series Blu-ray set is already listed for preorder over at Amazon UK with a November 21st release date.

Further below, after the break, you can find the full announcement about the home video release of the sixth season and complete series.

“Striking and elegant finale to one of TV’s most consistently strong dramas of the past decade” – David D’Addario, Variety

SEASON SIX AND THE COMPLETE SERIES ARRIVE ON
BLU-RAY™ DECEMBER 6, 2022

THE FINAL SEASON WILL ALSO BE AVAILABLE ON DVD DECEMBER 6

Better Call Saul’s final season concludes the complicated journey and transformation of its compromised hero, Jimmy McGill, into criminal lawyer Saul Goodman. From the cartel to the courthouse, from Albuquerque to Omaha, season six tracks Jimmy, Saul and Gene as well as Jimmy’s complex relationship with Kim, who is in the midst of her own existential crisis. Meanwhile, Mike, Gus, Nacho and Lalo are locked into a game of cat and mouse with mortal stakes.