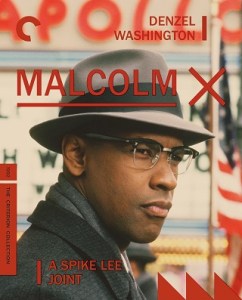 The 1992 biopic “Malcolm X” is officially coming to 4K UHD Blu-ray and Blu-ray via The Criterion Collection on November 22nd.  The film, directed, produced, and co-written by Spike Lee, starred Denzel Washington (in the lead role) as well as Angela Bassett, Delroy Lindo, Al Freeman Jr., Albert Hall, Theresa Randle, Kate Vernon, and the film’s director himself Spike Lee.  It’s most certainly worth noting that this film was nominated for two Academy Awards, including “Best Actor in a Leading Role” for Denzel Washington.

The movie has received a new 4K digital restoration supervised by cinematographer Ernest Dickerson.  The tech specs for the 4K UHD Blu-ray release include a 2160p video presentation in the 1.85:1 aspect ratio with HDR10 and Dolby Vision forms of high dynamic range as well as a DTS-HD Master Audio 5.1 lossless surround sound mix.  Tech specs for the Blu-ray include a 1080p HD video presentation in the 1.85:1 aspect ratio and DTS-HD MA 5.1 sound.  The 4K release will come in the form of a “combo pack” with it including both the film Blu-ray counterpart as well as a Blu-ray bonus disc, in a 3-disc set.  Whereas the Blu-ray release will be a 2-disc set with an extra disc for the bonus materials.

You can now find the 4K UHD Blu-ray and Blu-ray releases of the film available for preorder over at Amazon or directly via Criterion‘s website.  The bonus materials and details about physical extras set to be included are listed below.