2020 film The Dry with Eric Bana on Blu-ray January 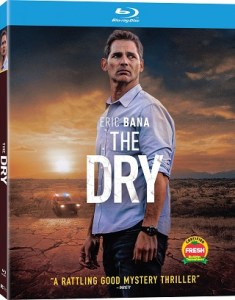 The 2020 film “The Dry“ is officially coming to Blu-ray Disc on January 18th, 2022 via RLJE Films. The film, directed by Robert Connolly & based on a book by Jane Harper, from IFC Films, stars Eric Bana, Genevieve O’Reilly, Keir O’Donnell, and John Polson. It’s most certainly worth noting, at the time of writing, that this film is “Certified Fresh” over at Rotten Tomatoes.

Tech specs for the Blu-ray include a 1080p HD video presentation in the 2.40:1 aspect ratio with DTS-HD Master Audio 5.1 lossless surround sound. You can now find the Blu-ray available for preorder over at Amazon. The bonus materials set to be included with the release are listed below, with their runtimes.

The Dry is directed by Robert Connolly (Balibo, Paper Planes) and co-written by Harry Cripps (“Supernova”) and Robert Connolly based on the book by Jane Harper.  The film stars Eric Bana (Munich, The Other Boleyn Girl), Genevieve O’Reilly (Star Wars franchise), Keir O’Donnell (American Sniper) and John Polson (The Boys). RLJE Films will release The Dry on DVD for an SRP of $27.97 and on Blu-ray for an SRP of $28.96.

Federal Agent Aaron Falk returns to his home town after an absence of over twenty years to attend the funeral of his childhood friend, Luke, who allegedly killed his wife and child before taking his own life — a victim of the madness that has ravaged this community after more than a decade of drought. When Falk reluctantly agrees to stay and investigate the crime, he opens up an old wound — the death of 17 year old Ellie Deacon. Falk begins to suspect these two crimes, separated by decades, are connected. As he struggles to prove not only Luke’s innocence but also his own, Falk finds himself pitted against the prejudice towards him and pent up rage of a terrified community.