John Carpenter’s Escape from L.A. on 4K in February 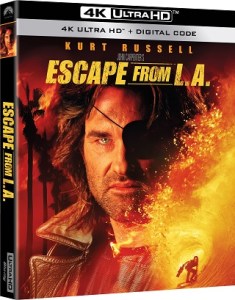 The tech specs for the 4K release include a 2160p video presentation in the 2.39:1 aspect ratio with HDR10 and Dolby Vision forms of high dynamic range and DTS-HD Master Audio 5.1 lossless surround sound. The release will include a digital code (copy) of the film. You can now find the 4K UHD Blu-ray available for preorder over at Amazon. Sadly, it appears that the only extra set to be included with the release is the original theatrical trailer — according to the press release.

Further below, after the break, you can find the full announcement regarding this 4K release of the film.

DIRECTED BY JOHN CARPENTER, THE EXPLOSIVE CULT-CLASSIC ARRIVES ON
4K ULTRA HD FOR THE FIRST TIME

Snake Plissken is back in the high-octane thrill-ride JOHN CARPENTER’S ESCAPE FROM L.A., arriving on 4K Ultra HD for the first time ever February 22, 2022 from Paramount Home Entertainment.

Released in 1996, JOHN CARPENTER’S ESCAPE FROM L.A. was the highly anticipated follow up to the fan-favorite hit Escape from New York.  Kurt Russell returns as anti-hero Snake Plissken, who is called upon to save the world from a doomsday device after a 9.6 quake levels most of Los Angeles.

The 4K Ultra HD release features exceptional picture quality with Dolby Vision and 5.1 DTS-HD Master Audio. The disc also includes access to a Digital copy of the film and the original theatrical trailer.