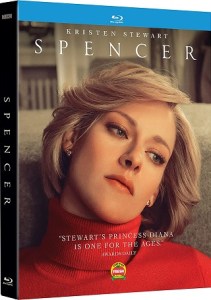 The 2021 film “Spencer“ is coming to Blu-ray Disc on January 11th, 2022 via Neon — distributed by Decal. The film, a biography about the late Diana Spencer (Diana, Princess of Wales), was directed by Pablo Larraín and stars Kristen Stewart, Timothy Spall, Jack Farthing, Sean Harris, Stella Gonet, and Sally Hawkins. It is most certainly worth noting, that at the time of writing, this film is currently deemed “Certified Fresh” over at Rotten Tomatoes.

The tech specs for the Blu-ray include a 1080p HD video presentation in the 1.66:1 aspect ratio and DTS-HD Master Audio 5.1 lossless surround sound. You can now find the Blu-ray available for preorder over at Amazon. The only bonus material set to be included with this release is listed below.

Further below, after the break, you can find the official trailer for the film.