Martial arts comedy The Paper Tigers on Blu-ray in June 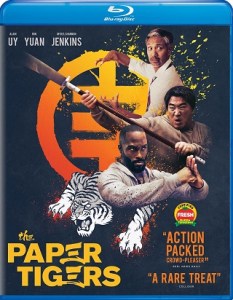 The 2020 martial arts comedy “The Paper Tigers“ is coming to Blu-ray Disc on June 22nd via Well Go USA. The film, written & directed by Quoc Bao Tran, stars Alain Uy, Ron Yuan, and Mykel Shannon Jenkins. It is certainly worth noting that the film, at the time of writing this, based on the critics, is “Certified Fresh” over at Rotten Tomatoes with a 100% rating. The tech specs for the Blu-ray release include a 1080p HD video presentation in a 1.85:1 aspect ratio and English DTS-HD Master Audio 5.1 sound. The Blu-ray is now available for preorder over at Amazon as well as over at retailers Best Buy and Target. The bonus materials set to be included with the release are listed below.