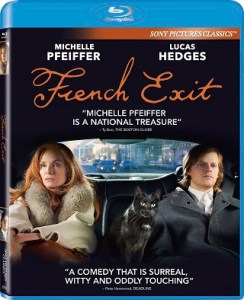 The 2021 film “French Exit” is officially coming to Blu-ray Disc on June 15 via Sony Pictures Home Entertainment. The film, directed by Azazel Jacobs, stars Michelle Pfeiffer, Lucas Hedges, Valerie Mahaffey, Imogen Poots, Susan Coyne, Danielle MacDonald, Isaach de Bankolé, and Tracy Letts. The tech specs for the Blu-ray release include a 1080p HD video presentation in the 2.39:1 aspect ratio with DTS-HD Master Audio 5.1 lossless surround sound. You can find the Blu-ray now listed with a placeholder page over at Amazon, although it’s not yet functional as a preorder. So, stay tuned for an update on that. The only bonus materials set to be included with this release are Deleted and Extended Scenes. Below, after the break, you can find the trailer for the film and the full info regarding the home video release.

STARRING MICHELLE PFEIFFER IN HER

“My plan was to die before the money ran out,” says 60-year-old, penniless Manhattan socialite Frances Price (Michelle Pfeiffer), but things didn’t go as planned. Her husband, Franklin, has been dead for 12 years. With his vast inheritance gone, she cashes in the last of her possessions and resolves to live out her twilight days anonymously in a borrowed apartment in Paris, accompanied by her directionless son, Malcolm (Lucas Hedges), and a cat named Small Frank—who may or may not embody the spirit of Frances’ dead husband.

Based on the Book By: Patrick DeWitt

Golden Globe® is the registered trademark and service mark of the Hollywood Foreign Press Association.