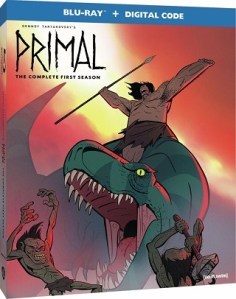 The animated TV series “Genndy Tartakovsky’s Primal: The Complete First Season” is officially coming to Blu-ray Disc on June 1st via Warner Bros. Home Entertainment. The show, which aired on [adult swim], featured 10 episodes in its first season and was deemed “Certified Fresh” over on Rotten Tomatoes with a perfect score. Tech specs for the release include a 1080p HD presentation in the 2.39:1 aspect ratio and a 5.1 surround sound audio presentation — presumably in a lossless format, although not yet confirmed. You can now find the Blu-ray available to preorder over at Amazon. The release on Blu-ray will come with a digital code (copy) of the 10 episodes of the first season of the show. Bonus materials set to be included with the Blu-ray release of the first season are listed below.

Further below, after the break, you can find the full announcement regarding the home video release.

“A piece of elemental storytelling that finds some real emotional depth without either of its protagonists uttering a single word of dialogue.” – IndieWire

Eat, or be eaten! Kill, or be killed! Get into survival mode with Adult Swim’s #1 prehistoric animated series with the release of Genndy Tartakovsky’s Primal: The Complete First Season on Blu-ray and DVD from Warner Bros. Home Entertainment on June 1, 2021. The critically acclaimed series displays a perfect 100% rating by critics & 99% by audience on Rotten Tomatoes, and recently won 3 Juried Emmy® Awards for Outstanding Achievement in Animation. Travel back in time and binge on all 10 fascinating episodes from the first season and go behind the scenes with interviews from the incredible talent from this wordless series. The edge-of-your-seat thriller is priced to own at $24.98 SRP for the DVD ($30.99 in Canada) and $29.98 SRP for the Blu-ray ($39.99 in Canada), which includes a Digital Copy (U.S. only). Genndy Tartakovsky’s Primal: The Complete First also available to own on Digital via purchase from digital retailers.

Coming off an award-winning final season of “Samurai Jack,” Adult Swim reunites with creator Genndy Tartakovsky on a new animated series. “Primal” features a caveman at the dawn of evolution. A dinosaur on the brink of extinction. Bonded by tragedy, this unlikely friendship becomes the only hope of survival in a violent, primordial world.