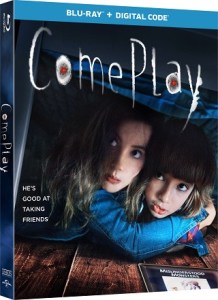 THE PULSE-POUNDING SUPERNATURAL THRILLER STARRING
GILLIAN JACOBS, JOHN GALLAGHER JR. AND AZHY ROBERTSON
IS NOW AVAILABLE TO OWN FOR THE FIRST TIME

Universal City, California, January 5, 2021 – A young boy who struggles to connect with others turns to his cell phone and tablet for companionship, befriending a strange and sinister non-human creature in the spine-chilling paranormal thriller, COME PLAY, available to own for the very first time on Digital January 12, 2021 and on Blu-rayTM, DVD and On Demand January 26, 2021 from Universal Pictures Home Entertainment.

Starring Gillian Jacobs (“Community”), John Gallagher Jr. (“Westworld”), Azhy Roberston (Marriage Story), and Winslow Fegley (Timmy Failure: Mistakes Were Made), the “wonderfully twisted” (Richard Roeper, Chicago Sun-Times) film is based on writer and director Jacob Chase’s own original short film, “Larry,” and explores the connection between technology and isolation through exciting, innovative and thrilling storytelling, keeping audiences on the edge of their seats from start to finish. COME PLAY was produced by The Picture Company for Amblin Partners.

Desperate for a friend, Oliver (Robertson), a lonely boy who feels different from everyone else, seeks solace and refuge in his ever-present cell phone and tablet. When a mysterious creature uses Oliver’s devices against him to break into our world, Oliver’s parents (Jacobs and Gallagher Jr.) must fight to save their son from the monster beyond the screen.

Bringing the terrifying vision of horror to life, the film’s mystical creature was created by none other than Jim Henson’s Creature Shop, known for its legendary Muppets and some of the most iconic puppetry in the world. Audiences everywhere can now witness the haunting story unfold as one family must overcome their differences to save themselves from a threatening supernatural force and the dangers that lurk in the shadows.

With the purchase of COME PLAY on disc or digital, fans are eligible to earn points towards special rewards via the Universal All-Access Rewards program. Members can redeem their points for digital movies, signed collectables, box sets, win exclusive prizes and more! For FREE registration and details please visit http://www.MyUniversalRewards.com.

COME PLAY will be available on Blu-rayTM, DVD and Digital.

Written and Directed By: Jacob Chase

Produced By: The Picture Company for Amblin Partners

Rating: PG-13 for terror, frightening images and some language