Mel Brooks film Spaceballs is coming to 4K in April 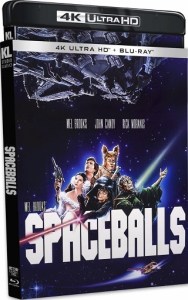 The 1987 Mel Brooks film “Spaceballs” is officially coming to 4K UHD Blu-ray on April 13th via KL Studio Classics. This news was just unveiled by the distributor via a Tweet. In that tweet, you can see the reversible cover artwork. The film, co-written & directed by Mel Brooks, featured a cast of Bill Pullman, John Candy, Rick Moranis, Daphne Zuniga, Dick Van Patten, the voice of Joan Rivers, and of course Mel Brooks. The tech specs for the 4K UHD Blu-ray have not yet been detailed but stay tuned for hopefully an update on that. The release will come in the form of a “combo pack” meaning that it’ll include its Blu-ray Disc counterpart. KL Studio Classics has announced the bonus materials will consist of the following.

UPDATE: you can now find the 4K UHD Blu-ray is available to preorder over at Amazon.