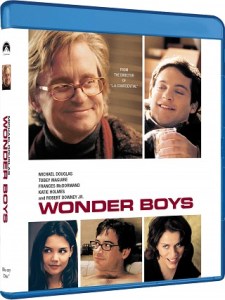 The 2000 film “Wonder Boys” starring Michael Douglas is officially coming to Blu-ray Disc, for the very first time, on November 24th via Paramount. The film, directed by Curtis Hanson, co-starred Tobey Maguire, Frances McDormand, Robert Downey Jr., Katie Holmes, and the late Rip Torn. The tech specs for the Blu-ray include a 1080p HD presentation in the original 2.35:1 aspect ratio and DTS-HD Master Audio 5.0 sound. This last bit, regarding the sound configuration, comes as an improvement over the previous 2000 DVD which only contained a Dolby Digital 5.0 sound mix, oddly enough. Yes, this never has received a 5.1 surround mix with the subwoofer channel. That’s not a misprint or typo. You can now find this Blu-ray available for preorder over at Amazon. The release will include the following bonus materials, ported over from the previously mentioned DVD:

It should be noted that this release will come in the form of a MOD (manufactured-on-demand) BD-ROM Blu-ray Disc if you order it via Amazon. However, if you find this on store shelves elsewhere or online elsewhere, it will be a pressed Blu-ray Disc. I was given this heads-up regarding the release. You can find a quote regarding that below.