“The Turning” with Mackenzie Davis on Blu-ray April 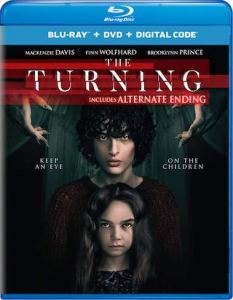 The 2020 horror film “The Turning“ starring Mackenzie Davis appears to be coming to Blu-ray Disc on April 21st, via Universal, according to retailers. The film, directed by Floria Sigismondi, co-stars Finn Wolfhard (Stranger Things), and Brooklynn Prince. The tech specs for the Blu-ray include HD video in the 2.39:1 aspect ratio with Dolby TrueHD 7.1 sound. The release will come in the form of a “combo pack” with a DVD and digital code (copy) of the film included. You can find the Blu-ray now listed for preorder over at Amazon. It’s also listed as “coming soon” for a preorder listing placeholder page over at Best Buy – with the same release date and artwork. The bonus materials set to be included on the release are listed below.