Available as part of : 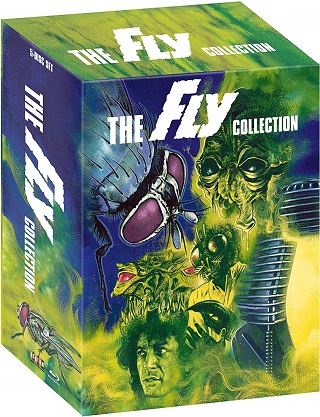 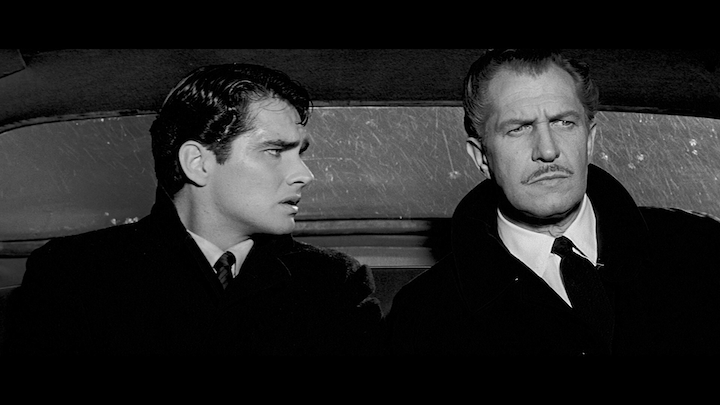 “Return on The Fly” was a 1959 science fiction (Sci-Fi) sequel film directed by Edward Bernds, best known for directing shorts for “The Three Stooges” during the 1950s, some science fiction films, and even two feature-length film features with The Three Stooges Meet Hercules (1962) and The Three Stooges in Orbit (1962). Bernds wrote the screenplay here to the film based on the original short story (“The Fly”) which was written by George Langelaan.

The story here involves two family members from the first film (The Fly). The main characters here include the son of the original scientist from the first film as well as the son’s uncle. The son, “Philippe Delambre” (Brett Halsey), and his uncle, “Francois Delambre” (Vincent Price), go back to the original laboratory. It’s here where Philippe does the predictable and tries to carry on the work of his father, despite warning from his uncle Francois.

Philippe has the money to hire on an assistant “Ronald Holmes” (David Frankham) and he purchases some new equipment to further along with the research, that his father started, of trying to teleport physical objects. The uncle visits from time-to-time to check in on the whole research if only to check in on his nephew, as he knows what might inevitably happen – like last time. Let’s just cut things short there on this film to avoid dishing out any spoilers here, but keep in mind the film’s title. 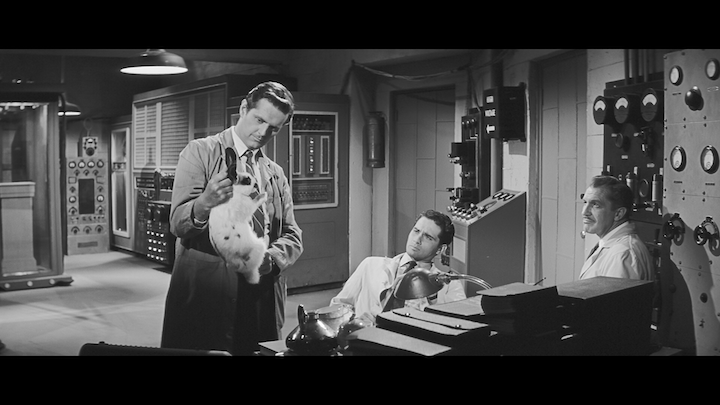 “Return of The Fly” is presented in the 2.35:1 aspect ratio, just as how it was originally shown during its 1958 theatrical run. This film was shot on 35mm film using the CinemaScope cinematographic process with anamorphic Bausch & Lomb lenses, according to the credits and IMDb‘s technical specifications page. Unlike the first film, the sequel (released only a year later) was shot in Black & White (not color). Because of this, you’ll notice the solid black level from the very start.

This has a pretty solid black level, that much is sure, as mentioned. There’s a nice amount of film grain left intact here, as well as a newfound amount of detail you’ll have never seen on the previous DVD or other home video releases. The film print has been cleaned up rather well it would seem and we don’t get all that many visual imperfections present. That’s not to say there aren’t any the way; as there is a nice amount share left in a tasteful manner.

Return of The Fly on Blu-ray has a slightly above just solid video presentation that I found to be well-worthy of giving a 4.25 rating for video quality. Lastly, I felt it worth noting that this seems to run almost 36Mbps constantly on the video bitrate – as I noticed when checking it throughout the film via my Blu-ray player. 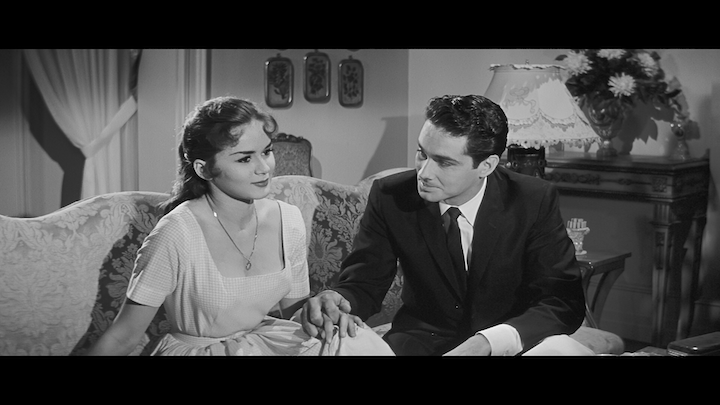 Audio here on the Blu-ray Disc debut of “Return of The Fly” is presented in DTS-HD Master Audio 2.0 Mono sound. This was originally presented in Mono during its theatrical run, according to IMDb. So, we get a lossless mono mix here via DTS-HD Master Audio 2.0 Mono. NOTE: There is a misprint on the packaging that says this includes a Stereo mix as well, which is not true. It’s just Mono here in terms of sound.

That being said, this mix offers up some clean sound quality with somewhat lifelike sound effects. The film opens up during a rainstorm which you can hear with a nice amount of fidelity behind it. Dialogue from the first line to the final is delivered very distinctively here and requires no volume adjustments. The original music used in the opening and the. later throughout the movie sounds good and fits the mood very well.

Finally, it’s certainly worth noting that there is one audio discrepancy around the 44:12 mark in the film. It’s just a short second or less of silence and then the audio comes back. During all of that, the audio never loses synchronization with the lips of the actors hereafter that drop out problem. It’s obviously not something that I like to hear in any audio mix but it is also not something to deduct from the overall audio score here for.

I’ll end by saying that the sound of that machine, first heard around 37 minutes in, is just incredibly loud each time that you hear it and is always sure to get the attention of the viewer.  All and all, Return of The Fly on Blu-ray earns itself a pretty nice 4.25 rating for audio quality. 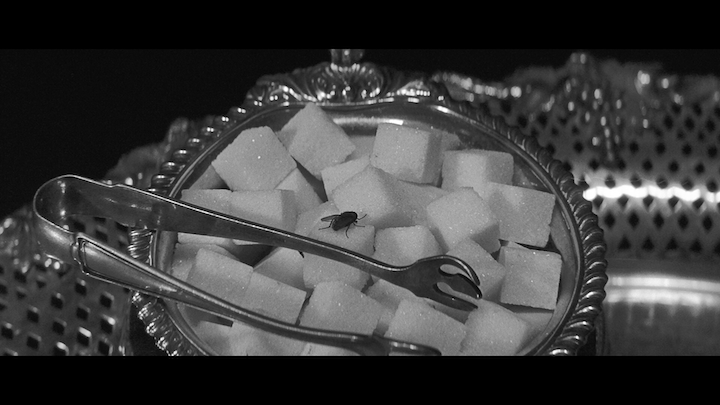 Bonus materials on this release, are presented in both SD (standard definition) and HD video quality with DTS-HD Master Audio 2.0 Stereo – unless otherwise noted below. These include the following:

Overall the bonus materials here are not a whole lot but they are nice in the way that we receive a new audio commentary with one of the actors from the film, as well as two other older audio commentary tracks, and lastly, there are a very, very short bit of promo materials totaling up to roughly 5 minutes. It still should be enough to leave the true fans of the film somewhat happy, but it does feel to be lacking a bit versus some of the other films in regards to extras included in this [“The Fly Collection”] Blu-ray Disc box set. 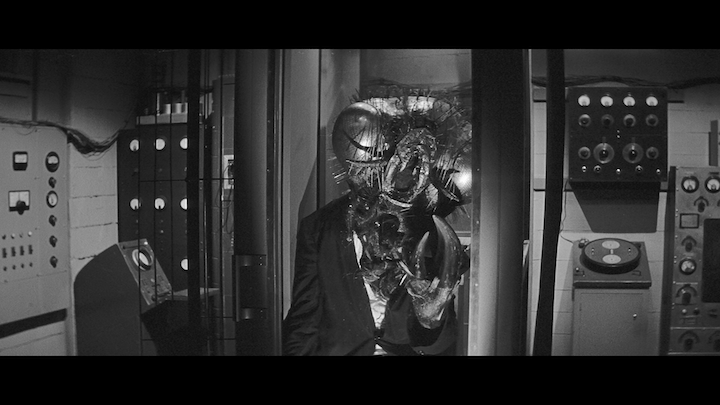 “Return of The Fly”, in its 1959 sequel, was a really pretty decent film overall. The downside to the film, back then and now, is definitely the fact that they chose to not shoot it in color, and instead in Black & White. The performance, as smaller of a supporting role as it was, from the legendary Vincent Price proves to be worthwhile and connects this film to the original 1958 film (“The Fly”) – which he also co-starred in.

Plotwise here to this sequel, the son decides to carry on the work of the father. The acting here is great, it’s just that Its ironic twist comes across comedic (in my opinion) thanks to the goofy oversized special effects. This was just not as tasteful in terms of subtle effects as the original first film. However, it is a direct sequel and one has to only accept it for what it is: somewhat okay in regards to the acting, meanwhile pretty predictable in terms of its plot, and the effects just seem to make it seem even more so odd and oversized than those of the first film.

Here on the Blu-ray debut of the film, the video quality in Black & White this time around is also in the 2.35:1 aspect ratio and being shot in CinemaScope (like the first film) it proves to look a bit more than just solid as a video presentation goes. The audio presentation here comes in the form of a DTS-HD MA 2.0 Mono mix that does the film full justice and sounds rather good in terms of sound quality. Lastly, the bonus materials offer up 3 audio commentary tracks (two of which are new), the trailer, TV spot, and a still gallery of images. It’s not a huge amount of extras but it is enough to leave fans of the film somewhat happy with we you get.