2019 film Ready or Not on Blu-ray in December 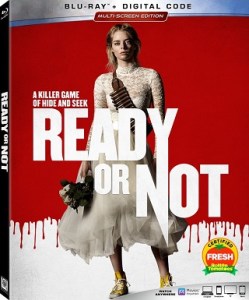 The 2019 comedy/horror film “Ready or Not“ is officially coming to Blu-ray Disc on December 3rd, via Fox Home Entertainment. The film, directed by Matt Bettinelli-Olpin & Tyler Gillett, stars Samara Weaving, Adam Brody, Mark O’Brien, Henry Czerny, and Andie MacDowell. This movie received positive reviews from critics during its theatrical run and is “Certified Fresh” over at Rotten Tomatoes. The tech specs for the Blu-ray include HD 1080p video in the 2.39:1 aspect ratio and DTS-HD 5.1 Master Audio sound. You can find the Blu-ray available for preorder now over at Amazon. The release will come with a digital code (copy) of the film. Bonus materials set to be included on the release are listed below.

Further below, after the break, you can find more details about this upcoming home video release of the film.

HERE COMES THE BRIDE…HURRY, RUN AND HIDE
​
Ready Or Not Arrives on Digital November 26
and on Blu-ray™ and DVD December 3

LOS ANGELES, CA (October 22, 2019) – The sanctity of marriage goes straight to hell when a young bride (Samara Weaving) competes in a time-honored tradition with her new husband (Mark O’Brien) and his insanely rich and eccentric Le Domas family (Adam Brody, Henry Czerny, and Andie MacDowell). The bride’s wedding night takes a turn for the worst when she realizes she is at the center of a lethal game of ‘Hide and Seek’ and must fight her not-so-loveable in-laws for her own survival.

The In-Home release is slaying with special features as writers Guy Busick and R. Christopher Murphy give insight on their script’s exploration of the Faustian bargain made by the Le Domas family. Directors Matt Bettinelli-Olpin, Tyler Gillett and Producer Chad Villella explain how they used practical effects to deliver an authentically bloody film.

Add READY OR NOT to your digital collection on Movies Anywhere November 26 and buy it on Blu-ray™ and DVD December 3 and start a new holiday family tradition this year!

READY OR NOT Blu-ray™ and DVD Bonus Features: