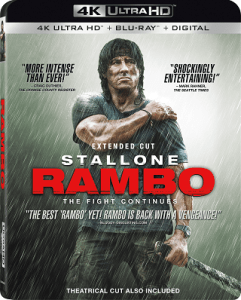 The legendary Academy Award® nominee Sylvester Stallone (2015, Best Supporting Actor, Creed) returns to his most explosive character yet when Rambo arrives on 4K Ultra HD™ Combo Pack (plus Blu-ray™ and Digital) and Digital 4K Ultra HD September 3 from Lionsgate. Just in time for Stallone’s reprisal of the role in Rambo: Last Blood (in theaters September 20), re-relive the fourth movie in the franchise set 26 years after Rambo made his big screen debut in First Blood. Written and directed by Sylvester Stallone, the film also stars Julie Benz, Matthew Marsden, and Graham McTavish. Experience four times the resolution of full HD with the 4K Ultra HD Combo Pack, which includes Dolby Vision®, bringing entertainment to life through ultra-vivid picture quality. When compared to a standard picture, Dolby Vision can deliver spectacular colors never before seen on a screen, highlights that are up to 40 times brighter, and blacks that are 10 times darker. Additionally, the 4K Ultra HD Combo Pack and Blu-ray feature Dolby Atmos® immersive audio mixed specifically for the home, to place and move audio anywhere in the room, including overhead. Available for the very first time in this absolutely stunning format, the Rambo 4K Ultra HD Combo Pack will include both the theatrical cut and unrated extended cut and will be available for the suggested retail price of $22.99.

The ultimate American action hero returns – with a vengeance! After spending several years in northern Thailand operating a longboat on the Salween River, John Rambo (Sylvester Stallone) reluctantly agrees to carry a group of Christian missionaries into war-torn Burma. But when the aid workers are captured by ruthless Nationalist Army soldiers, Rambo leads a group of battle-scarred, combat-hardened mercenaries on an epic, last-ditch mission to rescue the prisoners – at all costs.