Into the Badlands Season 3 Blu-ray August 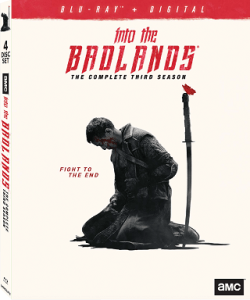 The TV show “Into the Badlands: The Complete Third Season“ is coming to Blu-ray Disc on August 27th via Lionsgate. The show, as seen on AMC, stars Daniel Wu, Aramis Knight, Emily Beecham, Orla Brady, Sherman Augustus, and Babou Ceesay. Tech specs for the Blu-ray release include 1080p HD video in the 1.78:1 aspect ratio with Dolby TrueHD 5.1 sound. The release will include a digital copy of the third season of the show. You can now find the Blu-ray available for pre-order over at Amazon. No bonus materials are listed to be included. Further below, after the break, you can find the official announcement regarding this upcoming Blu-ray release.

AMC’s groundbreaking martial arts drama comes to an end when “Into the Badlands”: The Complete Third Season arrives on Blu-ray™ (plus Digital) and DVD August 27 from Lionsgate. IndieWire (Liz Shannon Miller) calls the final season of this hit series “bloody, brutal, and jaw-dropping.” Starring Daniel Wu, Aramis Knight, Emily Beecham, Orla Brady, Sherman Augustus, and Babou Ceesay, “Season 3 is its best so far” (Stephen Harber, Den of Geek). The “Into the Badlands”: The Complete Third Season Blu-ray and DVD will be available for the suggested retail price of $44.99 and $39.98, respectively.

Sunny’s son contracts a mysterious illness that pressures him to join forces with Bajie. They journey back into the Badlands, where The Widow and Baron Chau are entrenched in a drawn-out war that has destabilized the entire region.