“Scooby-Doo, Where Are You?” comes to Blu-ray 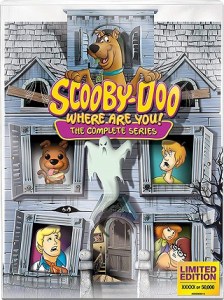 The classic 1969 Hanna-Barbera animated TV show “Scooby-Doo, Where Are You? The Complete Series“ is coming to Blu-ray Disc in a 50th-anniversary limited edition set on September 3rd via Warner. The set, styled after a mystery mansion, will be limited to 50,000 copies in total. Tech specs for the release have not yet been detailed, but you can expect full 1080p HD video and likely lossless (DTS-HD Master Audio) sound. The 4-disc set will include all 41 of the original episodes of the animated series as well as some new bonus materials and even physical extras like a Funko keychain and a “Scooby-Doo!” Encyclopedia (shown below). 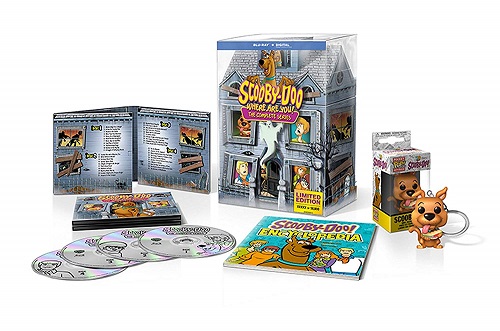 You can find the Blu-ray Disc set available for pre-order now over at Amazon and directly from Warner’s WBStore. Bonus materials set to be included on the release, in addition to a digital copy, are listed below.

The full details regarding the physical and bonus materials set to be included with the limited edition box set release are listed below, after the break.

Celebrate the 50th anniversary of the world’s most lovable, mystery-solving Great Dane, Scooby-Doo, along with the rest of the Mystery Inc. gang, as the complete Hanna-Barbera classic series, Scooby-Doo, Where Are You! comes to Blu-ray as a collectible, numbered limited edition in Mystery Mansion packaging.

The world’s most lovable, mystery-solving dog, along with his best friend Shaggy and the rest of the gang, stars in a spooky and laugh-filled collection of classic cartoons featuring the one and only Scooby-Doo. Scooby, the clumsy and cowardly canine, instinctively runs from things that go bump in the night. But this globe-trotting Great Dane solves monstrous mysteries and unravels ghostly goings-on like no one else. And even in the middle of the scariest situation, Scooby and Shaggy find time to satisfy their craving for their favorite food — pizza! So, watch out villains! Scooby-Doo is on your trail, and he always captures his quarry and solves the puzzle. But there’s nothing puzzling about finding fun and excitement — just sit back, have a Scooby snack and enjoy the zany animated antics of the wacky dog detective.

This must-own box set includes all 41 iconic episodes as a four-disc collection, as well as a Digital Copy of the series, plus unique memorabilia including an exclusive Scooby-Doo Funko keychain and a mini Scooby-Doo encyclopedia. It also features brand-new bonus content: