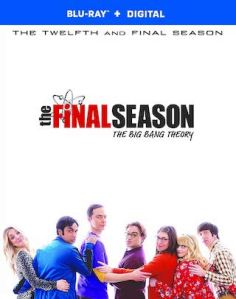 TV Show “The Big Bang Theory: The Twelfth and Final Season“ is coming to Blu-ray Disc on November 12th via Warner. The show, created by Chuck Lorre and Bill Prady, ran from 2007 through 2019 and it featured a cast of Johnny Galecki, Jim Parsons, Kaley Cuoco, Simon Helberg, Kunal Nayyar, Melissa Rauch, and Mayim Bialik. Tech specs for the twelfth season on Blu-ray include 1080p HD video in the 1.78:1 aspect ratio with DTS-HD Master Audio 5.1 sound spanning across a 2-disc set. The release will come with a digital copy of the twelfth season of the show. You can find the twelfth season on Blu-ray now over at Amazon. Bonus materials set to be included on the release are listed below.

It’s also worth noting, especially for fans, that there will be a huge Blu-ray Disc box set released on November 12th as well in the form of “The Big Bang Theory: The Complete Series [Limited Edition]“ (pictured below) which is available for pre-order now over at Amazon. Bonus materials EXCLUSIVE to this box set are listed below.