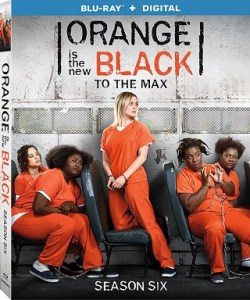 ORANGE IS THE NEW BLACK

TO THE MAX
SEASON 6

The inmates of Litchfield Penitentiary that you’ve come to know and love are all headed to the “max” when “Orange Is the New Black”: Season Six arrives on Digital June 10 and on Blu-ray™ (plus Digital) and DVD June 11 from Lionsgate. After inciting a riot in Litchfield, many of the familiar inmates are headed to maximum security for a “fresher and more surprising” (Ian Sandwell, Digital Spy) new season in a whole new environment. Starring Golden Globe® nominee Taylor Schilling (2015, Best Television Actress – Musical/Comedy Series, “Orange Is the New Black”), Golden Globe® nominee Kate Mulgrew (1980, Best Television Actress – Drama Series, “Mrs. Columbo”), Laura Prepon, and Golden Globe® nominee Uzo Aduba (2016, Best Supporting Actress – Limited Series or Television Motion Picture, “Orange Is the New Black”), who continue to please fans with “rich characters, ripping dialogue and great performances” (Dan Fienberg, The Hollywood Reporter). The “Orange Is the New Black”: Season Six Blu-ray and DVD will include audio commentaries with cast and crew, a never-before-seen featurette, and gag reel, and will be available for the suggested retail price of $34.97 and $34.98, respectively.

Picking up one week after the emergency response team stormed Litchfield Penitentiary, the ladies of Litch have been torn apart, literally and figuratively, as they enter a new facility in the sixth season of “Orange Is The New Black.” Now ​newbies ​starting at the bottom, they ​must navigate new rules and power dynamics while getting hazed by inmates and tortured by guards. Friendships will be tested and new allegiances formed – some by choice, others by circumstance – as the women face a slew of charges from the riot. Will they take plea deals and turn on each other or band together and keep their bonds intact?