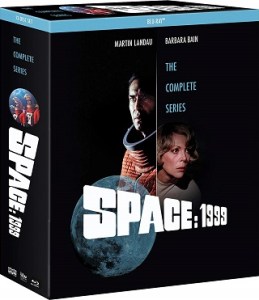 Los Angeles, CA – From Gerry and Sylvia Anderson, the legendary masterminds behind Thunderbirds, comes the epic sci-fi series, Space: 1999. On July 16, 2019, Shout! Factory will release Space: 1999: The Complete Series on Blu-ray and DVD for the first time in North America.

This set comes jam-packed, including all 48 episodes and an entire disc of bonus features, which are currently in progress and will be announced at a later date. Shout! Factory will also offer a limited edition set that includes a snow globe featuring an Eagle Transporter landing on the Moon, available for pre-order now at shoutfactory.com. The globe itself has a 4-inch circumference and sits on a 2-inch base.

September 1999: A nuclear waste dump on the lunar surface unexpectedly detonates, blasting the moon out of Earth’s orbit and taking the inhabitants of Moonbase Alpha on an unbelievable voyage of discovery and adventure. Under the command of John Koenig (Martin Landau), the Alphans hurtle through the stars, encountering fantastic worlds and beings in a universe where peril awaits at every turn. Together, Koenig and the Alphans face the ultimate challenge in the farthest reaches of space: survive…and find home.

Also starring Barbara Bain as Dr. Helena Russell, Barry Morse as Victor Bergman, and Catherine Schell as Maya, Space: 1999 is a true classic of science fiction television, presented here in a deluxe box set with a galaxy’s worth of special features that fans and newcomers alike will treasure. Strap yourselves in — the journey of a lifetime is about to begin!

EDITOR NOTE: This show had previously been released here in the United States in its first season on Blu-ray by another distributor back in 2010 – now OOP (Out of Print).