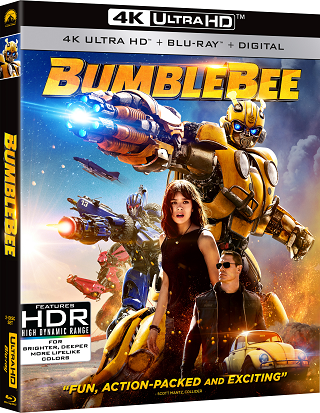 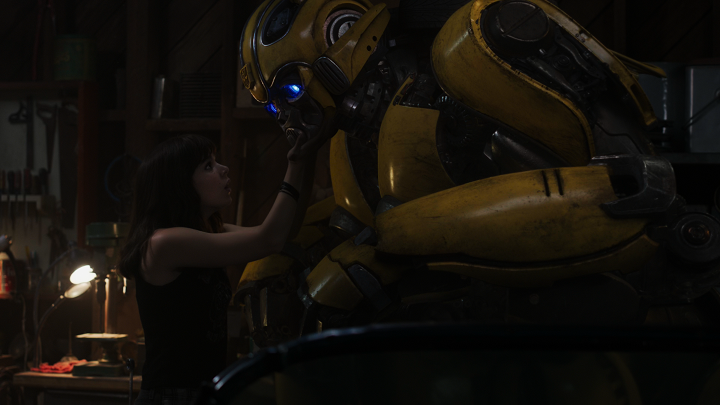 “Bumblebee” was a 2018 film directed by Travis Knight, best known for his work in the field of computer animated films with studio Laika. This was only Knight’s second feature-length film with his directorial debut being the animated film “Kubo and the Two Strings“ (2016). The story and screenplay here were both written by Christina Hodson, best known for also writing the films “Unforgettable” (2017) and “Shut In” (2016).

Bumblebee is the sixth live-action film to feature “The Transformers” characters created by Hasbro. The film is also a prequel to the first five films, all directed by Michael Bay, that included: “Transformers” (2007),  “Transformers: Revenge of the Fallen” (2009), “Transformers: Dark of the Moon“ (2011), “Transformers: Age of Extinction“ (2014), and “Transformers: The Last Knight“ (2017). Michael Bay had involvement with this as a producer, along with Steven Spielberg again serving as executive producer.

As the film opens there’s a war being fought on the planet “Cybertron” where “Optimus Prime” (voiced by Peter Cullen) is battling it out with the Decepticons. He manages to get Bumblebee to an escape pod, gives him orders, and set his destination as the planet Earth. The story here takes place during 1987 in a Californian town, with a 17-year-old girl named “Charlie” (Hailee Steinfeld) as our lead human character. Charlie is at the age where she wants to get out of the house with her mother, stepfather, and little brother. You can tell that Charlie is going through a rough time her life and is looking for something. She will definitely find something in a junkyard: Bumblebee hiding in the form of a bright yellow Volkswagen Beetle.

When he first arrived on Earth Bumblebee managed to attract the attention of a U.S. government, specifically one “Agent Burns” (John Cena). Burns chased our Autobot friend away during a battle with a Decepticon then and is still searching for him. That’s just one of the dilemmas faced here. Basically, over the course of this film, you get to see Bumblebee find his first human companion and things meet up with the previous films many, many years later. That leaves room for more prequels and such that could take place during the late 1980s and 1990s. So, based on this film’s success and the franchise being this well-known, I’d say you can expect another Transformers film very soon.

“Bumblebee” is a nice bit of fresh air breathed back into the franchise which had honestly become a tad stale over the course of the four sequels to the original 2007 film. It’s also nice to see this fan-favorite character to finally get their own movie focusing entirely on them as well as see things from the perspective of a female protagonist this time around. There are not as many explosions here, admittedly, since Michael Bay only produced it but there’s an acceptable amount of things blowing up and going boom over the course of the film. This is really a fun movie and I’m glad to see the franchise back to being popular. The critics seemed to enjoy this film as well as it carries a “Certified Fresh” badge over at Rotten Tomatoes – at time of writing this. 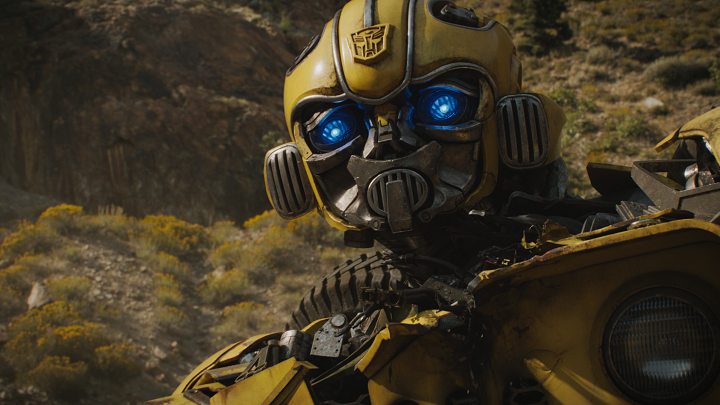 This comes to 4K UHD Blu-ray presented in the 1.78:1 aspect ratio, although it was shown in the 1.85:1 aspect ratio during its theatrical run – according to IMDb. In its 4K debut, “Bumblebee” gets both HDR10 and Dolby Vision forms of High Dynamic Range. This movie was shot digitally in 3.4K resolution using the Arri Alexa Mini, Arri Alexa SXT, and Arri Alexa XT Studio cameras. This was then mastered in a 2K digital intermediate, despite having higher resolution (near 4K) source material. This is a rather common practice these days and should not raise any major alarm, in regards to the 4K video presentation.

The most impressive and complex of the CG animation can be found in the opening scenes on Cybertron. Seeing “Optimus Prime” and the Decepticons right in the middle of a battle looks absolutely gorgeous, just as you saw in the previous films with Industrial Light & Magic (ILM) efforts. ILM it seems maybe didn’t do all of the animations this time around but it feels pretty obvious they contributed to this opening scene. That opening scene and another scene involving a Decepticon are visually very compelling and look excellent in 4K. It may not look as impressive as the previous films here but that’s because of just more focus on a human being and those around her this time around, with only one Transformer really getting as much screen time.

The live-action scenes, later on, look really great and come with a lot of detail, especially in the close-up shots of faces. There’s a bright visual style with vibrant colors, just as you would expect for a film based in the 1980s and the flesh tones are accurate. The black level appears to be solid. HDR manages to make the colors of the “Transformers” (in CG animation) look even more eye-popping visually in this 4K presentation. It doesn’t always look amazing, but it sure does about 95% of the time. “Bumblebee” on 4K UHD Blu-ray earns itself a rating just short of perfect for video quality and just looks great. I think if they were to go back and use a 4K master it could perhaps look just a smidge better. 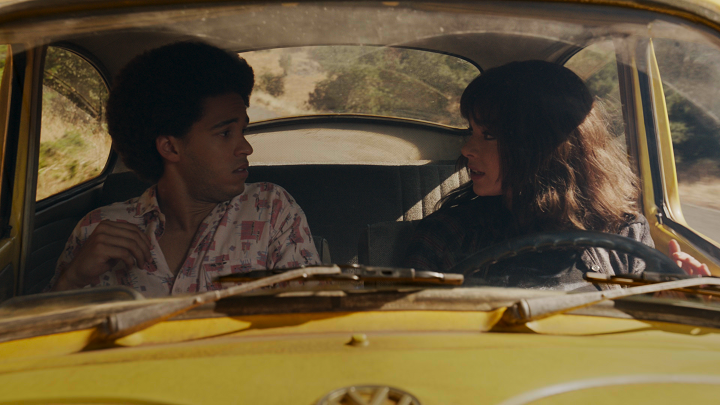 Audio here is presented in Dolby Atmos, with a Dolby TrueHD 7.1 core for those without the proper equipment to decode Atmos. It is worth noting that Blu-ray actually also includes Atmos, as well.

The opening scenes on Cybertron pack a serious punch in terms of the audio presentation. This sequence comes with excellent rear channel use, a large amount of bass booming from the subwoofer, and very impressive atmosphere via the height speakers. Dialogue from the voice actors for the transformers, such as “Optimus Prime” (Peter Cullen), is delivered in a very distinctive manner from primarily the center channel speaker. The dialogue later on in the film from actors during the live-action part of the film all sounds just as impressive and is properly mixed. I found no reason at all here to make any volume adjustment throughout listening at my reference level.

The mix is just as intense as you have come to expect from the films in the franchise, especially in comparison to those that had Atmos mixes on Blu-ray before the 4K format was even released. It’s a really fun experience for all ages much like the previous films, as it proves to be filled with just the right amount of action. Sure, there’s admittedly less action than in the previous films but you need to remember this wasn’t a film made by Michael Bay. I personally think this style works and does still pay respect to the first five films in terms of its sound mix.

This is for sure some Dolby Atmos “demo material” for those of all ages. I certainly consider this one of my new favorite Atmos mixes. This mix definitely works hard enough to earn itself a perfect rating for audio quality. 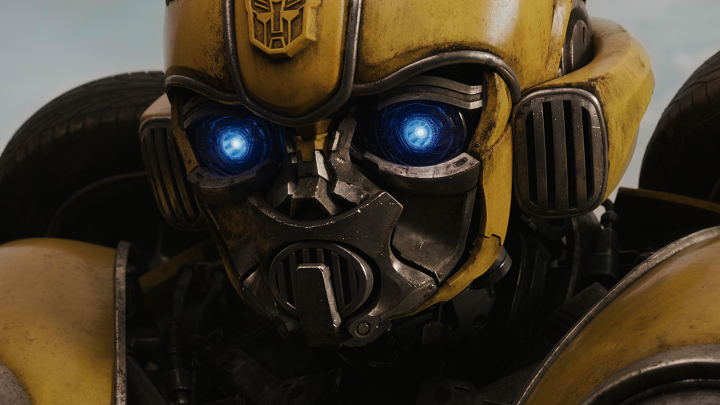 The real bonus materials are found on the “Extras” (2nd) Blu-ray Disc. These all are presented in HD video with Dolby Digital 2.0 Stereo sound (@224kbps). Extras include:

Overall the bonus materials here are good and total up to a well over an hour of content. There’s an animated motion comic with some short backstory, deleted and extended scenes, outtakes, an informative feature, and some making-of featurettes. It’s enough to leave you somewhat pleased in terms of extras, especially if you also get the physical comic book included. 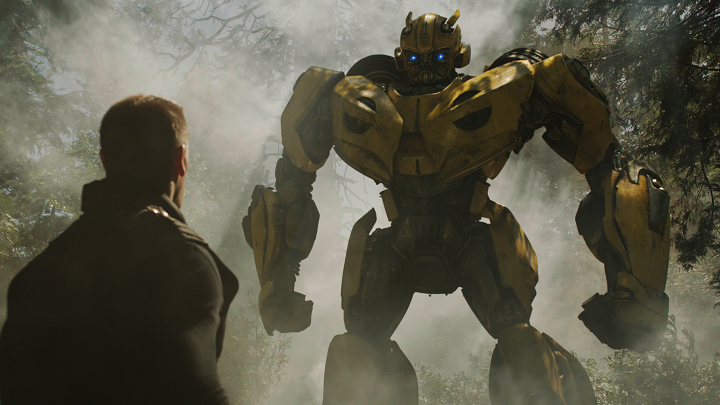 “Bumblebee” proved to be a nice new approach at the “Transformers” franchise and gives us a glimpse back to the 1980s (appropriately enough) to when the first generation was what most adults my age will remember. It’s also a prequel that focuses only on one of the characters from the franchise, albeit you will get to see “Optimus Prime” and some other familiar faces along the way. Both the story and acting here are really good from the human actors and the CG animated main character. Hailee Steinfeld is a fresh new face and does a really nice job here being the lead. It’s probably one of the best of the Transformers films so far, and I’m certainly not the first to say that.

The video quality here is very impressive in 4K with both HDR10 and Dolby Vision forms of High Dynamic Range included. The audio presentation here is for certain one of my new favorite Dolby Atmos mixes, as it proves to have its intense moments. Let’s face it: we’ve come to expect these films in this franchise to both look and sound great now for over a decade. I’m happy to report that they continue to look and sound great with “Bumblebee” in its debut to the 4K format. Lastly, the bonus materials are pretty good and have a runtime of just a bit over an hour total. This release on 4K is certainly recommended.