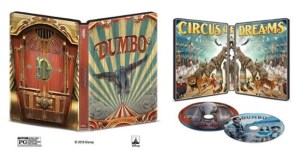 It may have just hit theaters but the 2019 live-action version of “Dumbo” from Disney is already listed to be coming to both 4K UHD Blu-ray and Blu-ray Disc later this year. Retailer Best Buy not only has the pre-order listings up for both version but also has a listing up with artwork (pictured above) for an exclusive Steelbook for the 4K release. No info about the release date has been announced yet, but you can expect it to come out likely around June – based on its placement at retailers. Stay tuned for any further details regarding this release in the future.