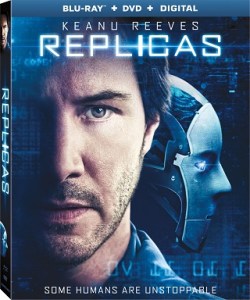 Science fiction thriller “Replicas“ featuring Keanu Reeves and Alice Eve is officially coming to Blu-ray Disc on April 16th via Lionsgate. The film, directed by Jeffrey Nachmanoff, features a supporting cast consisting of Thomas Middleditch, John Ortiz, Emjay Anthony, and Emily Alyn Lind. Tech specs for the Blu-ray include 1080p HD video in the 2.40:1 aspect ratio with DTS-HD 5.1 Master Audio sound. The release will come in the form of a “combo pack” with a DVD and digital copy of the film included. The Blu-ray doesn’t have a functional pre-order listing yet over at Amazon, but there is a placeholder. Bonus materials set to be included on the release are listed below.

Further below, after the break, you can find the full details about this upcoming release from the official announcement.

Some Humans Are Unstoppable

In this suspenseful sci-fi thriller, Keanu Reeves stars as William Foster, a neuroscientist on the verge of transferring human consciousness into a computer when his beloved wife (Alice Eve) and children are tragically killed in a car crash. Desperate to resurrect his family, William recruits a fellow scientist (Thomas Middleditch) to help secretly clone their bodies and create replicas. When William learns that he can only replicate three of the four family members, he makes a decision with fateful consequences.

Take home Replicas and dive headfirst into the twists and turns of this intense brain-churner with an audio commentary with director Jeffrey Nachmanoff and executive producer James Dodson, a making of featurette, and never-before-seen deleted scenes. The Replicas Blu-ray™ Combo Pack and DVD will be available for the suggested retail price of $24.99 and $19.98, respectively.