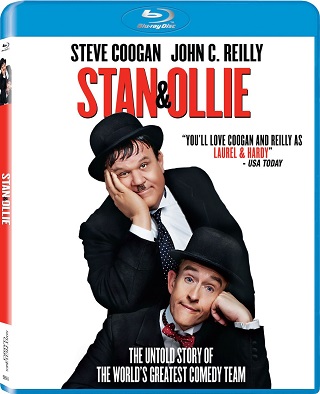 The 2018 film “Stan & Ollie” starring Steve Coogan and John C. Reilly is officially coming to Blu-ray Disc on March 26th, via Sony Pictures Classics. This is a biography about slapstick comedians Stan Laurel and Oliver Hardy, which was directed by Jon S. Baird. The movie co-stars Shirley Henderson, Nina Arianda, and Danny Huston. The tech specs for the Blu-ray have not yet been detailed, but stay tuned for a possible update. My personal guess is you can expect 1080p video in the 2.35:1 aspect ratio with DTS-HD 5.1 Master Audio sound, but remember that’s only a guess based on previous releases. The Blu-ray is not yet available for pre-order over at Amazon, but stay tuned for a definete update on that. Bonus materials set to be included on the release are listed below.

The Untold Story of the World’s Greatest Comedy Act​

CULVER CITY, Calif. (February 12, 2019) –Two-time Academy Award® nominee Steve Coogan (Best Motion Picture of the Year and Best Writing, Adapted Screenplay, Philomena, 2014) and John C. Reilly, who received a Golden Globe® nomination for Best Actor in a Motion Picture Musical or Comedy for his performance, star as the slapstick comedy legends Stan Laurel and Oliver Hardy in STAN & OLLIE arriving on digital, Blu-ray™ & DVD March 26 from Sony Pictures Home Entertainment. The film follows the pair through a farewell tour across the U.K. as they attempt to re-connect with both their fans and each other. STAN & OLLIE is directed by Jon S. Baird (Filth) and also stars Nina Arianda (Florence Foster Jenkins) and Shirley Henderson (Harry Potter and the Chamber of Secrets).

The digital, Blu-ray and DVD release of STAN & OLLIE includes four featurettes: “Making Stan & Ollie,” where stars Steve Coogan, John C. Reilly and director Jon S. Baird discuss the making of the film and why Laurel & Hardy’s legacy prevails; “Playful Prosthetics,” where prosthetics designer Mark Coulier shows how he brought the iconic Stan & Ollie to life; “The Dancing Duo,” which explores the complex working relationship at the center of the film that made Laurel & Hardy one of the greatest comedy duos of all time; and a Q&A with the cast and crew as they explain the film’s genesis, tone, and intricate production design; plus three never-before-seen deleted scenes.
Synopsis:
Laurel & Hardy, one of the world’s great comedy teams, set out on a variety hall tour of Britain in 1953. Diminished by age and with their golden era as the kings of Hollywood comedy now behind them, they face an uncertain future. As the charm and beauty of their performances shine through, they re-connect with their adoring fans.

The tour becomes a hit, but Stan & Ollie can’t quite shake the specter of Laurel and Hardy’s past; the long-buried ghosts, coupled with Oliver’s failing health, start to threaten their precious partnership. A portrait of the most tender and poignant of creative marriages, they are aware that they may be approaching their swan song, trying to rediscover just how much they mean to each other.

STAN & OLLIE has a run time of approximately 98 minutes and is rated PG for some language, and for smoking.