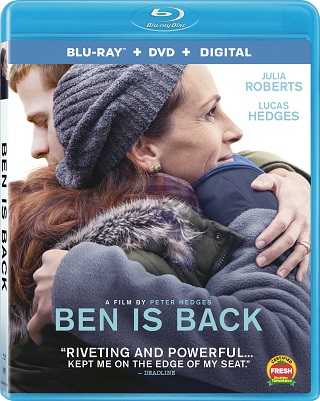 The 2018 Peter Hedges film “Ben Is Back“ starring Julia Roberts and Lucas Hedges is coming to Blu-ray Disc on March 5th, via Lionsgate. The film has received much critical acclaim, in fact, it’s “Certified Fresh” over at Rotten Tomatoes. The supporting cast includes Courtney B. Vance and Kathryn Newton. Tech specs for the Blu-ray include 1080p video in the 2.35:1 aspect ratio and DTS-HD 5.1 Master Audio sound. The release will come in the form of a “combo pack” with a DVD and Digital Copy of the film included. The Blu-ray is now available for pre-order over at Amazon. Bonus materials set to be included on the release are listed below.

“Riveting and powerful… kept me on the edge of my seat.”—    Pete Hammond, Deadline

Julia Roberts delivers a riveting performance as a mother swept into a race against time after her troubled 19-year-old son (Lucas Hedges) returns home for Christmas—and suddenly disappears. Over a turbulent 24 hours, new truths are revealed—and a mother’s love is tested—in this unforgettably powerful film.

Bring home Ben is Back and learn how writer/director/father Peter Hedges approached each scene in the special features’  audio commentary and movie photo gallery. The Ben is Back Blu-ray Combo Pack and DVD will be available for the suggested retail price of $24.99 and $19.98, respectively.

Rating: R for language throughout and some drug use.