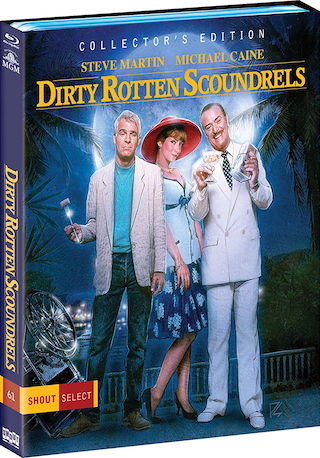 “A laugh-out-loud escapade! A joy to watch! A delight!” – The New York Times

Los Angeles, CA – Shout Select will release the classic con-men comedy Dirty Rotten Scoundrels in a collector’s edition Blu-ray set for the first time on January 22nd, 2019. This release is mastered from a brand-new 2K scan of the film and comes complete with bonus features including a new interview with writer Dale Launer, behind-the-scenes featurette, and audio commentary with director Frank Oz. Fans can preorder this Collector’s Edition set now at shoutfactory.com.

In the south of France, two rival con men — suave and sophisticated Lawrence (two-time Oscar®-winner Michael Caine, The Cider House Rules) and third-rate American hustler Freddy (Steve Martin, The Jerk) — make a wager. The first one to extract $50,000 from the next woman they meet wins … and the other leaves town. The bet is on, the stakes are high and the blows are low in this hysterically funny, ruthlessly witty, dirty, rotten comedy!

•Mastered from a Brand-New 2K Scan of the Film