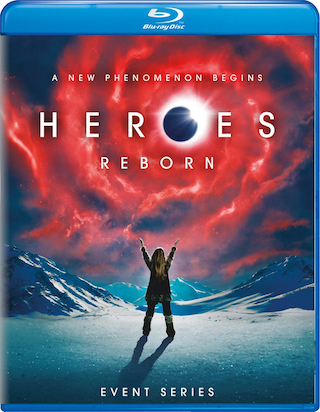 The 2015 TV mini-series “Heroes Reborn” is finally getting a Blu-ray Disc release in the form of “Heroes Reborn: Event Series“ on October 23rd via Universal. The 13 episode series was created by Tim Kring, responsible for the original TV series “Heroes” that originally aired on NBC and ran for a total of four seasons (2006-2010). This mini-series served as a continuation of (of sorts) to the original “Heroes” TV series and featured some of the original cast members from that TV show including Jack Coleman, Zachary Levi, Greg Grunberg, Masi Oka, and Sendhil Ramamurthy. This “Heroes Reborn” event series ran from 2015 through 2016 and aired on NBC. This Blu-ray release was actually originally slated for release way earlier in this year, but it seems that was pushed back, and now it’s seeing release.

Tech specs for the release include full 1080p HD video in the 1.78:1 aspect ratio and DTS-HD 5.1 Master Audio sound. The Blu-ray is available for PRE-ORDER over at Amazon. Bonus materials set to be included on the release are listed below.