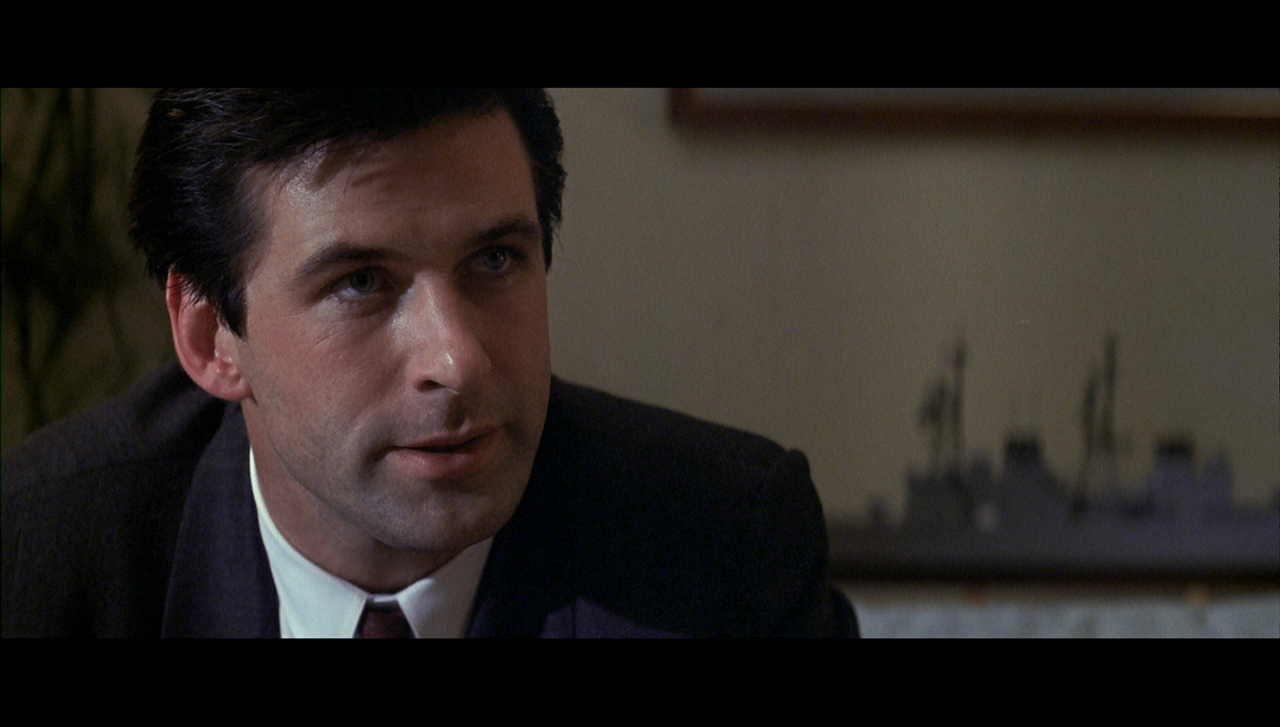 “The Hunt for Red October” was the first film to feature Tom Clancy‘s character “Jack Ryan” – a character who spawned a franchise that has spanned across four other films and that is now an upcoming Amazon Prime series (“Jack Ryan”) debuting later this month. For this film they chose one hell of a director, John McTiernan. McTiernan is best known for films like “Die Hard” (1988), “Last Action Hero” (1993), and “Predator” (1987).

The film is based on a novel (of the same title) written by Tom Clancy. The screenplay adaptation was co-wrote by Larry Ferguson and Donald E. Stewart (credited as Donald Stewart). Screenwriter Larry Ferguson is best known for his work on films such as  “Highlander” (1986) and “Beverly Hills Cop 2” (1987). It’s worth noting that the late screenwriter Donald E. Stewart would go on to work as screenwriter for two more “Jack Ryan” films  – “Patriot Games” (1992) and “Clear and Present Danger” (1994).

The story here involves a Russian nuclear submarine Commander “Marko Ramius” (Sean Connery) trying to defect to the United States with his crew. The commander and his second in command “Captain Borodin” (Sam Neill) are not getting away easily though with this new cutting edge nuclear submarine in their efforts to defect to the enemy. The Russian government is trying their best to convince folks in Washington that it’s actually a missing submarine.

As the Russians are trying to convince the U.S. government that they have a missing submarine, one man knows this is not the case, and that’s our hero “Jack Ryan” (Alec Baldwin). Ryan gets on a plane and heads to one “Admiral Greer” (James Earl Jones) with what he believes to actually be going on, that the Russians are trying to defect to America. It doesn’t take much convincing, as Ryan has developed a bit of a reputation for knowing what he’s talking about, as we can tell.

Long story short, and avoiding spoilers,  Jack Ryan heads out on a helicopter and to the USS Dallas submarine, which is headed up by “Bart Mancuso” (Scott Glenn). Once he’s onboard the Dallas, Ryan has to convince the commanding officer and crew to track down the missing submarine – “Red October” – hence the film’s title.

Along the way you’ll get to see some excellent performances from a stellar supporting cast including the likes of Tim Curry, Courtney B. Vance, Stellan Skarsgård, Jeffrey Jones, and the late (politician / actor) Fred Dalton Thompson.

“The Hunt For Red October” can be a bit slow moving of a film, lacking constant action, and more relying on its story and characters building up to something. Some people may not find this film to be to their liking and deem it boring, for that reason, but in actuality it’s a very smart, well-written, well-acted and well-directed film. Still that being said, it’s not my favorite of the “Jack Ryan” films. Just felt I had to be honest there, although I do find the film to be rather enjoyable. 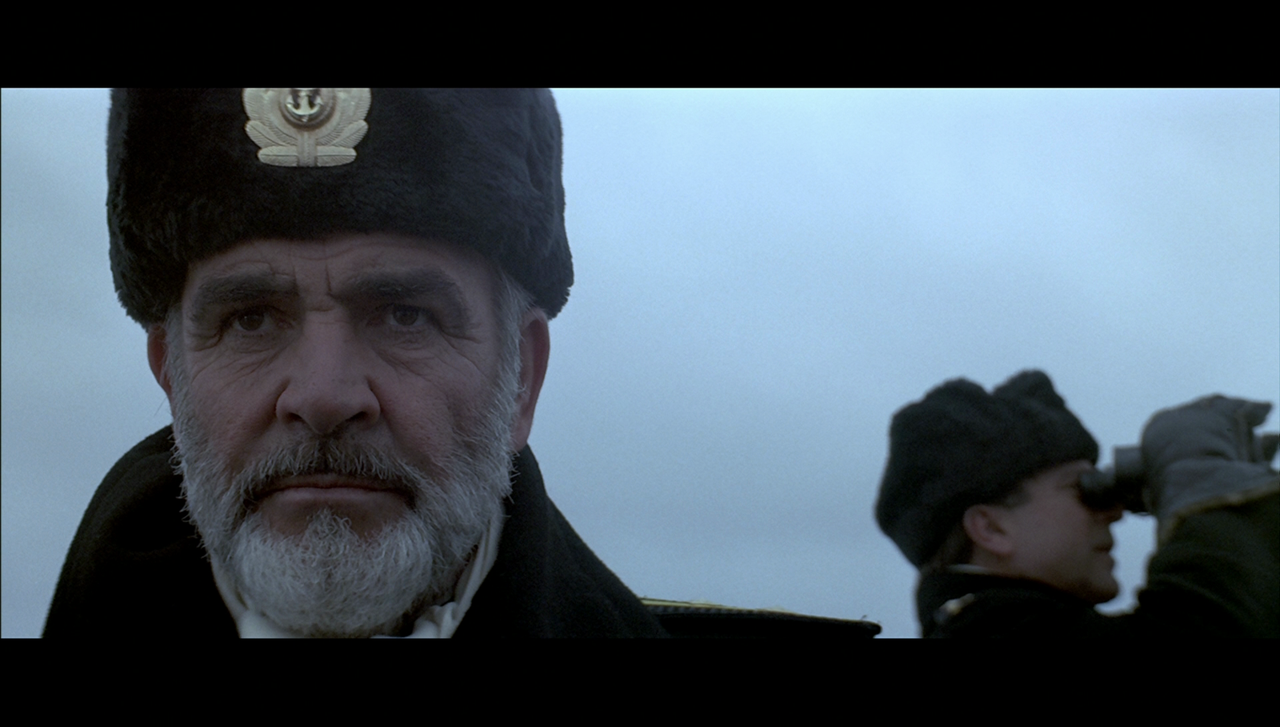 According to the technical specifications listing on IMDb, the film was shot on 35MM film using Panavision cameras. This is presented in 4K 2160p resolution in the 2.39:1 aspect ratio with both Dolby Vision and HDR10 forms of HDR (High Dynamic Range). This makes for an admittedly soft (at times) presentation, but holds a pretty decent and slightly impressive amount of newfound detail in the 4K presentation, especially in close-ups. Just as was the case, but it seems perhaps more so here, there was DNR (digital noise reduction) applied which can make things feel even softer, with film grain sadly not fully intact.

The black level here is solid, and maybe a bit too solid for some folks. In fact, in comparison to the original Blu-ray Disc release in some photographs that I took I noticed it to appear almost like “day and night” (instead of “night and day”) in terms of the brightness. The Blu-ray presented a more bright (and obviously not accurate) visual presentation, while the 4K with high dynamic range behind it appears much darker, and makes more emphasis on shadows. That’s something that will take some serious getting used to for some viewers. However, as I said, this is actually a more accurate representation of the film in terms of the HDR darkening things up.

Something very important about this film is the fact that about 90% of this film takes place underwater in submarines, a very dark place. Imagine, just imagine, that a submarine setting might come across perhaps darker when HDR is added to the visual mix of things. The addition of HDR does make for more accurate colors on costumes and such, and it seems to produce more accurate fleshtones. These photo comparisons of the Blu-ray versus 4K that I’m referring to can be found HERE and HERE (via Twitter posts).  Take a look for yourself, but I’ll point this out though, I am not a professional photographer, those are not actual screenshots done digitally, and that they were photographed using DNR on a smartphone with a pretty high end digital camera.

The excellent cinematography done by Jan De Bont (Director of Photography) is able to stand out a bit more, with his intentions coming across better thanks to the color here via high dynamic range. The reason that color was important for the cinematographer was because of the submarines looking similar that he opted to use color tones to help the viewer distinguish which sub was which. For instance, he said that the “Dallas” sub had emphasis on red, oddly enough the “Red October” had emphasis on blue, and the other subs had emphasis on the color green. This type of original intentions of the filmmaker gets more accurately detailed when something like high dynamic range is added in, regardless if things become darker or not.

This 4K video presentation, I must say, offers a solid 4K presentation that actually does a ‘catalog’ title like this justice. I don’t know that I would really go as far as to say that this is the best that the film has ever looked, or ever will look, but it sure appears (to me) to be a bit more impressive in terms of detail with 4K resolution – making use of more bandwidth, and resulting in much less compression. The visual effects done by the folks at Industrial Light & Magic hold up rather well here in the 4K and only the early CG (computer generated) sequences look a tad bit dated. Keep in mind though, that computer generated special effects were really in their early days back in 1990, so that’s totally forgivable. 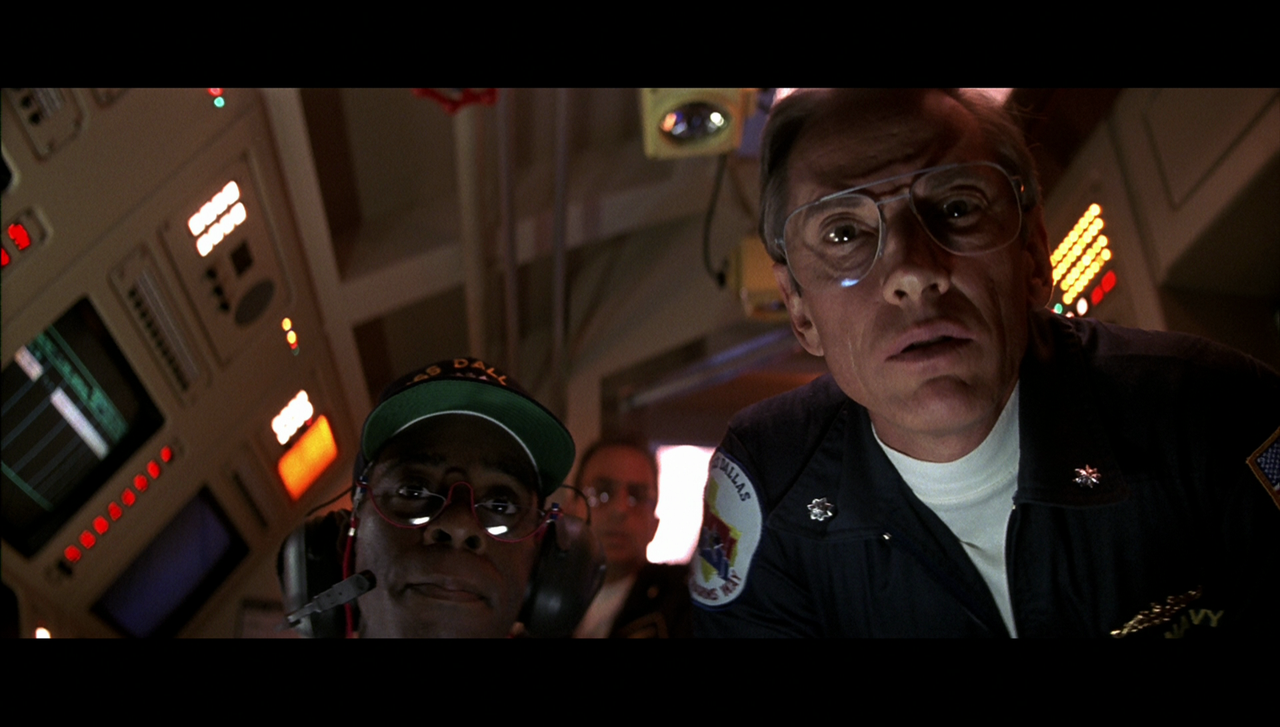 Starting off you’ll notice that the film’s original Score composed by Basil Poledouris gets mixed nicely, almost equally, into both the front (left and right) and rear channel speakers. This really helps to set the vibe and build suspense and such. There’s a pretty nice amount of bass present here in just the Score, leading to a decent amount of subwoofer action during the more climatic moments of the music.

The dialogue is delivered almost entirely from the center channel speaker, and doesn’t ever get overwhelmed by any of the music or the sounds onboard the submarines, and other various sound effects throughout the course of the film. Some of the sound effects at later points in the film make nicer use of the bass and lead to more of your subwoofer getting some much needed attention. Overall, this mix is just the same as on Blu-ray, but it still holds up to have its few moments, and proves to be a solid lossless 5.1 mix. Being ten years old as a lossless 5.1 mix, it definitely has room for improvement, and that’s something like Dolby Atmos could have helped with. 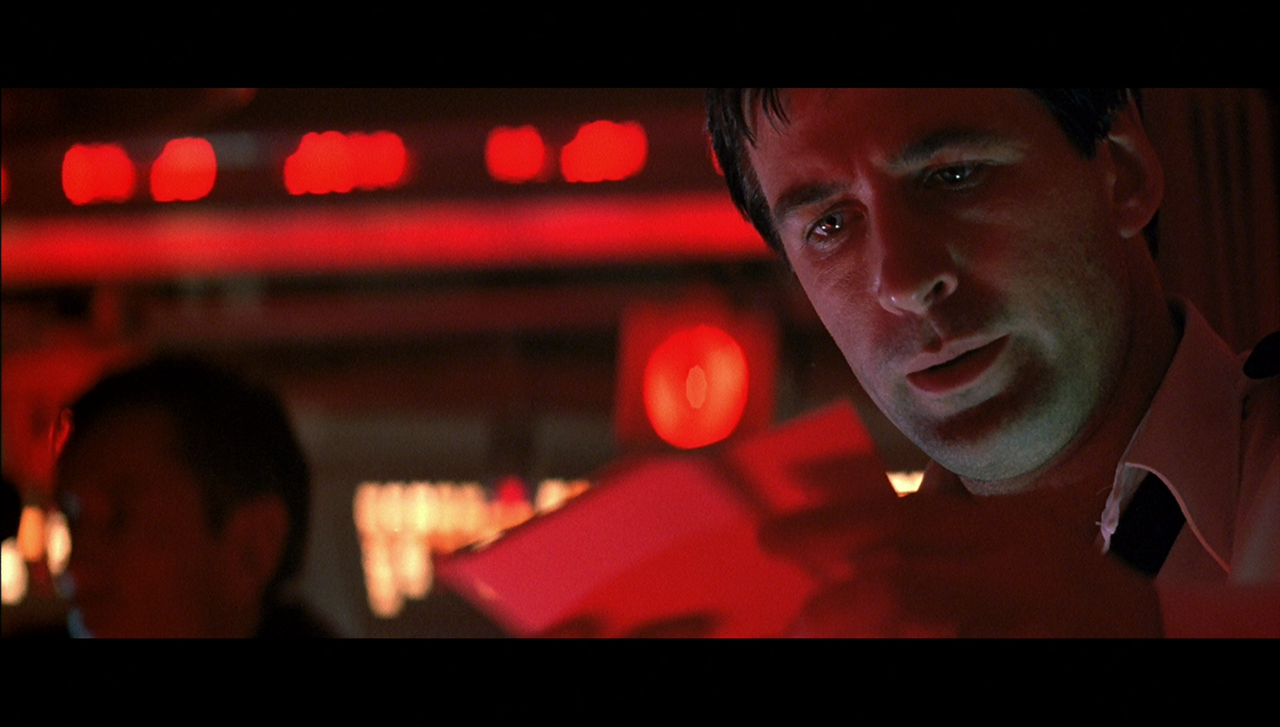 Bonus Materials are not on the 4K UHD Blu-ray Disc, with the exception of an Audio Commentary with the Director, which is on the 4K UHD Blu-ray (and the Blu-ray). The rest of the bonus materials (aside from that commentary) are included on the Blu-ray Disc. These are all presented in 1080p HD video with Dolby Digital 2.0 Stereo (@192kbps) sound, unless otherwise noted below. They are comprised of the following:

Overall, the bonus materials are nothing more than just the original Blu-ray Disc bonus materials completely “recycled” on the very same disc they were on before. I just did that same thing, myself, I copied and pasted that sentence from another review. See how generic that is? However, in this case it was fitting. Anyway, you hopefully get my point there. It’s just the same thing all over again, almost “copy and pasted”, but just physically the same disc included. That really doesn’t merit a high score usually for me when I see this, however, I am glad to always see at least nothing having been removed in terms of bonus materials. So, I do reward for that, but I also factor in something lacks new content for bonus, and that is why you get the low score here. 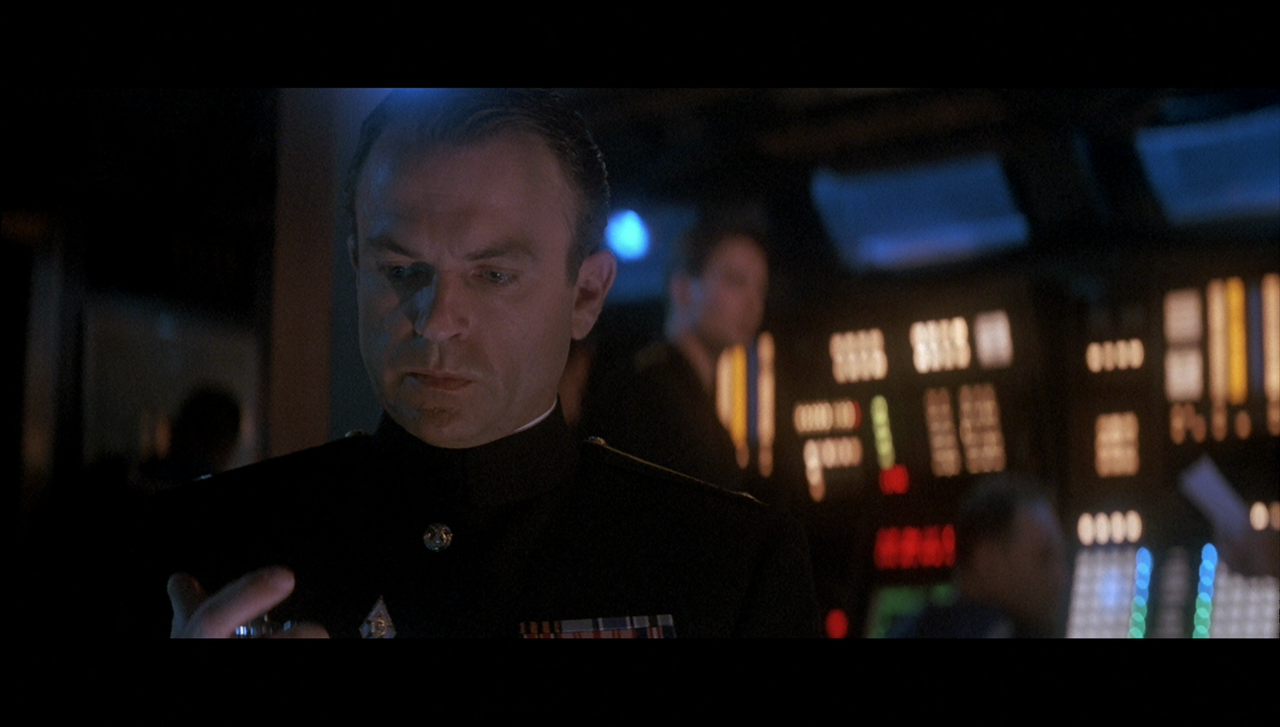 “The Hunt for Red October” as a film, was one of the many greats from director John McTiernan, and offers up exceptional performances from Sean Connery, Alec Baldwin, and the countless others in this cast of superb actors.

As far as a 4K UHD Blu-ray goes this is a slight improvement over the previous Blu-ray Disc release (included here). It has at times somewhat impressive newfound detail (in comparison to the Blu-ray), especially in close-up shots. The addition of High Dynamic Range helps deliver deep blacks, improving the black level – important to a film that takes place almost entirely in submarines, with dark scenes. It has its moments, that much is for sure. The audio mix here is just the identical Dolby TrueHD 5.1 that has been on the previous Blu-ray release, and I think was even on the HD-DVD release – in that original “Jack Ryan” box set.

Overall, “The Hunt for Red October” on 4K is not the biggest improvement here but is one just ever so slightly, and only visually. Keep in mind though, this was a 1990 film and is the first film chronologically in this “Jack Ryan 5-Film Collection” 4K UHD Blu-ray box set, so perhaps the video quality gets better along the way with these films, as it did on HD-DVD and Blu-ray, all those years ago. More reviews are coming, individually, for the four other films included in the box set release that this 4K version of the film appears on.