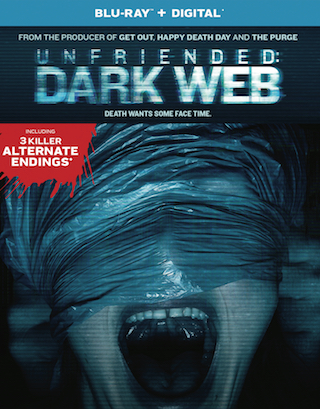 FROM THE PRODUCER OF GET OUT, SPLIT, AND THE PURGE FRANCHISE COMES THE SHOCKING CYBER-THRILLER UNFRIENDED SEQUEL

Universal City, California, August 21, 2018 – Blumhouse and Bazelevs unleash the second thrilling chapter of the disturbing saga, UNFRIENDED: DARK WEB, arriving on Digital and the all-new digital movie app MOVIES ANYWHERE on October 2, 2018 and on Blu-ray, DVD and On Demand on October 16, 2018, from Universal Pictures Home Entertainment. The “bone chilling” and “viciously entertaining” (Daily Dead) film follows a group of friends who stumble upon mysterious computer files that will change their lives forever. Featuring three killer alternate endings, UNFRIENDED: DARK WEB on Blu-ray, DVD and Digital offer viewers the chance to watch a variety of unsettling and deadly conclusions.

When a 20-something finds a cache of hidden files on his laptop, he and his friends are unwittingly thrust into the depths of the dark web. They soon discover someone has been watching their every move and will go to unimaginable lengths to protect the dark web. Unfolding in real-time, UNFRIENDED: DARK WEB is the most terrifying horror yet from the producer of Unfriended, Happy Death Day and The Purge.

UNFRIENDED: DARK WEB stars Colin Woodell (Unsane, XOXO), Betty Gabriel (Get Out, Upgrade), Rebecca Rittenhouse (“The Mindy Project,” Don’t Worry, He Won’t Get Far on Foot) and Andrew Lees (“The Originals,” “The Pacific”). The film comes from writer/director Stephen Susco (The Grudge) and is produced by Timur Bekmambetov (Unfriended, Hardcore Henry) and Jason Blum (Get Out, Split).

The Unfriended 2-Movie Collection will also be available on DVD on October 16th, 2018. Longtime fans and newcomers to the franchise can experience both movies, just in time for Halloween, in one must-own set including Unfriended and Unfriended: Dark Web.

Unfriended: Dark Web will be available on Blu-ray, DVD and Digital, and Movies Anywhere.

MOVIES ANYWHERE is only available in the United States. For more information, visit https:// moviesanywhere.com.