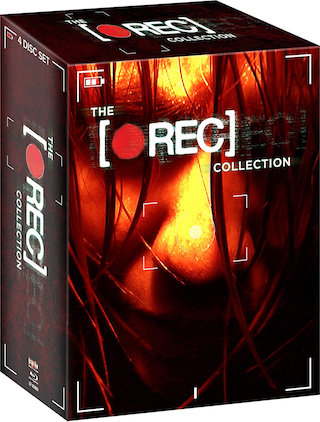 In the first film, [REC], a TV reporter and her crew are asked to cover a crew of firemen on duty. What seems like a routine story about a night at the fire station soon turns into a nightmare. Trapped inside a quarantined building, the crew must try to survive the terror that rages inside. [REC] 2 picks up minutes after the end of [REC]. The authorities have lost contact with the people trapped inside the quarantined building and chaos reigns. A Special Operations Unit has been tasked with entering the premises … only to discover that this is anything but a straightforward mission. [REC] 3: GENESIS leaves the confines of the quarantined building to follow the wedding of Koldo and Clara. Everything appears to be running smoothly and the bride and groom are enjoying a wonderful day … until some of the guests start showing signs of a strange illness and unleash a torrent of violence. [REC] 4: APOCALYPSE returns focus to Ángela Vidal, the young reporter who has managed to make it out of the building alive. But she hasn’t made it out of the building alone as she carries the seed of the strange infection. She is taken to a provisional quarantine facility: the perfect location for the virus to be reborn.