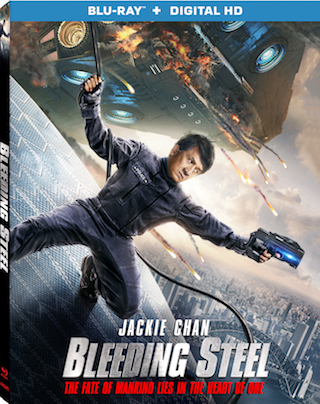 The 2017 Leo Zhang directed Chinese action sci-fi film “Bleeding Steel” starring Jackie Chan is coming to Blu-ray Disc on August 21st via Lionsgate. Tech specs include full 1080p HD video in the 2.40:1 aspect ratio and DTS-HD 5.1 Master Audio sound, in a combination of both spoken English and Mandarin languages, with obvious subtitles included. The release will come with a Digital Copy of the film included. “Bleeding Steel” on Blu-ray is available now for PRE-ORDER over at Amazon. No bonus materials will be included on this release. Below, after the break, you’ll find the official trailer and official announcement for the release.

A special force agent is assigned to protect a scientist and his creation from a sinister gang in Bleeding Steel, arriving on Blu-ray™ (plus Digital), DVD, and Digital August 21 from Lionsgate. This film is currently available On Demand. Honorary 2016 Academy Award® recipient Jackie Chan plays Hong Kong police inspector Lin Dong, who learns that a biochemical invention has been surgically implanted into his missing daughter. With help from a hacker, Lin tries to connect the dots between the device, a sinister army, and a strange phenomenon called “Bleeding Steel.” Packed with nonstop action and thrills, the Bleeding Steel Blu-ray and DVD will be available for the suggested retail price of $21.99 and $19.98, respectively.

In an action-packed drama reminiscent of ‘80s techno-sci-fi thrillers, Jackie Chan stars as Lin, a police inspector in modern Hong Kong. While tracking down a deranged, mech-enhanced villain, Lin discovers that a geneticist’s lost biochemical invention has been surgically implanted into his missing daughter. With the help of a young hacker, Lin connects the dots between the device that haunts his daughter, his enemy’s sinister army, and a strange cultural phenomenon called “Bleeding Steel.”

Show Lo Hi My Sweetheart, Journey to the West

Rating: Rated R for Violence and Some Language