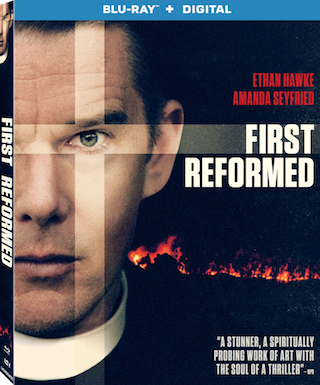 “A stunner, a spiritually probing work of art with the soul of a thriller.”

From legendary writer-director Paul Schrader (Raging Bull, Taxi Driver), First Reformed arrives on Blu-ray™ (plus Digital) and DVD on August 21 from Lionsgate. Academy Award® nominee Ethan Hawke (Best Supporting Actor, Boyhood, 2014) is “better than ever” (IndieWire, Eric Kohn) alongside Amanda Seyfried and, in a powerful dramatic turn, Cedric the Entertainer. The film, Rotten Tomatoes Certified Fresh™, is being hailed as “an epiphany” (The New York Times, A.O. Scott) and “one of the mind-bending treasures of recent cinema” (The New Yorker, Richard Brody). The First Reformed Blu-ray and DVD release includes a never-before-seen featurette and audio commentary with director Paul Schrader and will be available for the suggested retail price of $24.99 and $19.98, respectively.

Reverend Ernst Toller (Hawke) is a solitary, middle-aged parish pastor at a struggling church. When a pregnant parishioner (Seyfried) asks the reverend to counsel her husband, Toller is plunged into his own tormented past-and equally despairing future-until he finds redemption.

Ethan Hawke Boyhood, Valerian and the City of a Thousand Planets