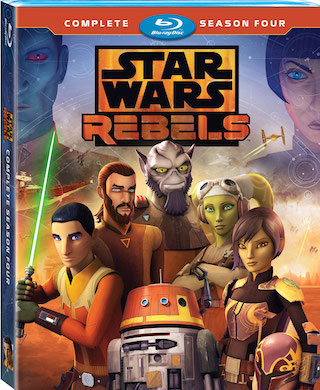 Disney / Lucasfilms Ltd. plans to bring “Star Wars: Rebels – Complete Season Four” to Blu-ray Disc on July 31st. Tech specs for the release include full 1080p HD video in the 1.78:1 aspect ratio and Dolby Digital 5.1 sound, spanning across a 2-disc set. The title is available for PRE-ORDER now over at Amazon. Bonus materials set to be included on the release are listed below.

As paths come together, we explore the journey of the Ghost crew with some of the talented people who brought them to life.

Executive Producer Dave Filoni shares insights into the Force and its importance across the Star Wars saga.

Go behind the scenes with composer Kevin Kiner to discover what inspired some of the most iconic music in the series.

Go behind the scenes with the cast and crew in 8 entertaining and information-packed episode recaps!

Go behind the scenes with the cast and crew in 8 entertaining and information-packed episode recaps!