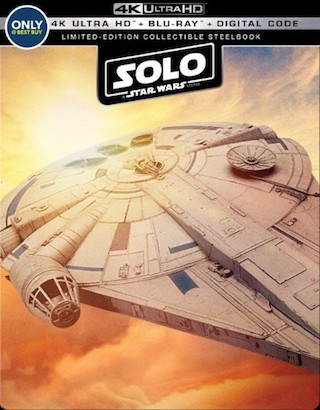 EDITORIAL NOTE: This news is a bit ahead of things, considering the film just recently hit theaters and has no release date yet announced on home video. However I think this is worth sharing with you all, especially 4K, Steelbook, and the franchise fans.

As I was looking through the upcoming Steelbook EXCLUSIVES over at retailer Best Buy, I noticed earlier this week that there’s already a PRE-ORDER listing for the recently released (2018) Ron Howard directed film “Solo: A Star Wars Story” in an exclusive 4K UHD Blu-ray Steelbook. The release (as pictured above) says it will be a “combo pack” including also a Blu-ray Disc and Digital Copy of the film. This news, again, is way ahead of things, so stay tuned for updates a bit further down the road, so-to-speak.