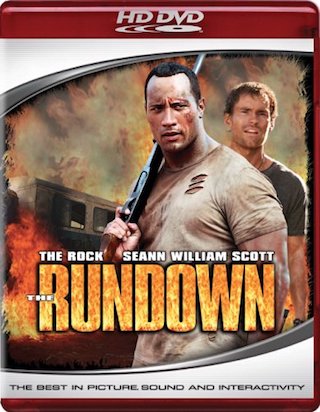 For Director Peter Berg, the film The Rundown was an interesting note for him. Before his ultimately better film Friday Night Lights, The Rundown marked the first time Berg directed a film that went on to become a big success. Before The Rundown, Berg had films like Very Bad Things which was just that and The Last Seduction which was excellent. The Rundown also marked the first main feature film (main staring role) for wrestler turned actor Dwayne “The Rock” Johnson. Now Universal has decided to re-release the film in the new HD-DVD format. What lies ahead? Join me on the journey to find out.

Beck (Dwayne “The Rock” Johnson) is the type of man who one calls on to do something someone else wouldn’t do. Beck is more of a retrieval expert. An early scene, where he retrieves a ring off of an NFL quarterback’s finger, gives us a little bit of insight into the type of man Beck is. His boss, after this successful mission, decides to send Beck off to the Amazon forest to retrieve his son Travis (Seann William Scott). Instead of using the a-typical locales like LA, Maimi, etc, Berg decided to opt for the Amazon jungle which helps make the film into something slightly new. Once in the Amazon forest, Beck is taken to the town of El Dorado, which is run by Hatcher (Christopher Walken). Travis, we learn, is a fearless fortune hunter looking for the ultimate treasure that Hatcher happens to be looking for at the same time.

Beck soon meets Mariana (Rosario Dawson), a bartender who hates Hatcher as much as the next person. Hatcher, we learn, makes his workers pay for everything including the shovels they use day by day. All of the wages his workers earn tend to go right back into his pocket resulting in the common hatred toward Hatcher. As Beck finds out quickly, Hatcher is the wrong man to mess with as he has tons of big hired goons that are available at his beck and call. Beck learns that Travis is looking for an ancient Indian relic that will apparently free the Indians in some way. We never learn how exactly and I don’t think Travis cares either as he wants to simply sell the relic on eBay. Speaking of Travis, I found it quite interesting the kind of role-reversal Scott provided for Travis. Granted he still plays the kind of cocky person he played in the American Pie films, but he brings more of a personality to Travis than Stifler had (more of a serious tone). Beck, for one of “The Rock’s” first main acting features, is a fine character. “The Rock” injects the necessary heroism and action into his character. I don’t really need to speak on Hatcher as Christopher Walken, no matter what film he acts in, always seems to bring that level of credibility to his roles.

Where The Rundown shined was that Director Peter Berg decided to use locales like the Amazon forest instead of the usual locales. This resulted in many scenes where the action actually felt real and not something that was completely made up. I also enjoyed how Berg decided to give Beck the type of character trait where Beck would rather fight with his hands instead of guns. “Guns take me to a place I don’t like” Beck tells us. Instead of fighting with guns (well, he uses some toward the end), Beck uses his fists and wit resulting in the common action scene feeling like something totally different (especially the scene where he and Travis and taken hostage).

Coming off a film like Very Bad Things, it was very evident that Peter Berg could direct a great film. With The Rundown and Friday Night Lights, Berg has proved that he can indeed direct a great film. Instead of making the standard action popcorn type fare, Berg decided to use a different tone to his film resulting in a completely different feel to a plot that has been done before (the whole rescuing someone). Newcomer “The Rock” adds a bit of spice to the mix as do Scott, Dawson and the always fabulous Walken. For a fun 100 minutes, give The Rundown a spin.

The original DVD release of The Rundown had a very large problem. The color scheme used seemed overly sharp resulting in some scenes seeming almost too real. With the HD-DVD release of The Rundown, Universal has addressed this problem a bit, but the problem still remains. Take the scene where Beck and Travis roll down the hill in the Jeep. The jungle trees, with the color of green, seemed almost too green; the dirt almost too brown. This resulted in the transfer looking like it was put in the oven and simply forgotten about. Besides this slight negative, the rest of the transfer looked great. The actual print, how it should be, remained crystal clear with no real signs of damage. Sharpness was spot on, while edge enhancement was not very noticeable. The problem of colors seeming too real remained despite Universal best efforts to remedy this problem. However, this problem doesn’t really take away from the improvements. The Rundown certainly looks sharper and clearer than ever before.

The video transfer had a few bugs, but these bugs certainly ran off for the audio transfer. The transfer sounds great. Dialogue was clear enough while the overall dynamic range, from the early opening club scene where Beck kicks some butt, to the Jeep rolling down the Amazon jungle, exploded from every little speaker resulting in a complete home theater experience. The sub moves in and out quite a lot, maybe almost too fast. The only real negative here, if I had to find one, was that some of the scenes where the sub was moving so fast resulted in the dialogue feeling kind of muted. To remedy this problem, I had to lower and raise the volume a few times, which isn’t a huge negative, but definitely something to point out. While not completely perfect, The Rundown seemed to showcase the eventual direction that HD-DVD audio transfers want to take.

The Rundown is necessarily first-rate action as some critics have declared, but it’s definitely a great way to spend 100 minutes. All the actors add a lot to the film, particularly newcomers “The Rock” and legend Christopher Walken. While the video transfer still had a bit of trouble, the audio transfer was great. Too bad we don’t get any new features from Universal, which is starting to become annoying. If you already own The Rundown you don’t necessarily need to run out and grab this HD-DVD version unless you want slightly better picture but a great audio transfer.

Buy this HD-DVD at Amazon