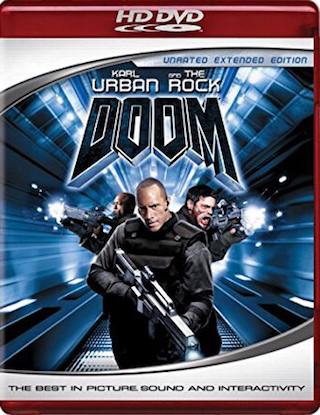 I will be honest and inform you that I have yet to like a video game based film since 1995’s Mortal Kombat. It seems that no matter how closely they try to follow the story based on the game, the director always fails. One of the more famous director’s in the video-game to movie based series is director Uwe Boll, who has brought us The House of the Dead and the recent Bloodrayne, These movies, as the popular consensus agrees, were extremely awful. They lacked anything redeeming, despite the original source material being pretty good. When I heard of a film being made on the game series Doom, I began to worry as I figured it would follow the typical trend of terrible video-game based movies. Can Doom reverse the horrible trend of terrible video-game based movies? Read on to find out

Doom begins with a fly in shot over the red planet Mars. We move in more and see the Olduvai Research Station, which is a remote scientific facility on Mars. And that is the last scene we see of the planet Mars. For a movie based on a game that takes place on the red planet Mars, we never fully see the planet except for the opening scene. Maybe this is me wanting what I saw in the game series. But every film director has to take a few creative liberties right? Well, I am very disappointed to report to that director Andrzej Bartkowiak and Universal seem to have taken a few too many creative liberties when making this film as the film is nothing like the game at all.

The basic plot of the film revolves around a group of Marines named Rapid Response Tactical Squad. The year is 2046 and a portal to an ancient city on Mars has been discovered in the middle of an American desert. The Olduvai Research Station has been built to try to study this city. Naturally there is a huge breach of security and the Rapid Response Tactical Squad is sent in to save the day. The leader is Sarge (portrayed by Dwayne “The Rock” Johnson). The members included Reaper (Karl Urban), Destroyer (Deobia Oparei), Mac (Yao Chin), Goat (Ben Daniels), Duke (Razaaq Adoti), Portman (Richard Brake), and The Kid (Al Weaver). Despite some of these team members having interesting names, that is about all that is interesting about them.

On the red planet Mars, we see humans running. Running from what you may ask? An unseen threat of course! We meet a woman named Samantha Grimm, who is the sister of Reaper or John Grimm. She is an anthropologist sent to the station. Once there she decides to reconstruct a complete skeleton of a humanoid Martian woman. We soon learn that the original inhabitants of this planet had a 24th chromosome, one more than we have. Of course this extra chromosome gave them super strength, super speed, super intelligence, and super healing abilities. And what usually has these character traits? Monsters!

The biggest problem with this film is the sole fact that Universal, after receiving some complaints, decided not to include the infamous ‘Hell’ from the game series. I guess using the word ‘Hell’ as a setting is a bit too scary, despite the film being rated R. The movie feels like some kid is moving the camera. A majority of the major action, minus the FPS sequence, are jumbled and simply feature tons of bullets and people yelling.

Doom is one of those movies that tries to present a story that could be interesting, but rather just introduces the beginnings of the story, but never tell us the middle or the end. I guess Universal and director Andrzej Bartkowiak figured Doom fans would rather see a bunch of ugly looking monsters being killed instead of seeing a live-action film based on the game they love. Doom is not as bad as the handful of recent video-game based films, but it is a movie that could have been so good had it just followed the simple, basic plot called story instead of solely focusing on bullets flying.

For the HD-DVD Release, Doom maintains its’ 2:35:1 Aspect Ratio. While the DVD Release had a bit of damage in some of the lab scenes and some of the darker scenes, the overall image sees a big improvement here. Flesh tones are a lot sharper, colors are even deeper, which is a fabulous positive considering the film takes place in a majority of darker scenery. Darks were a tad bit muddled and hard to make out in the original DVD release, but the HD-DVD release completely fixed this problem as the darks are even darker, not in a negative way. The overall feel of the scenery, a dark, dank lab on Mars, completes the fine presentation here. I sometimes wonder if HD-DVD is going to ever experience a completely poor image release. Since companies are releasing some of their bigger titles for the first few waves, films like Doom do really showcase the power that HD-DVD can have. Considering the DVD release was pretty impressive, the HD-DVD release takes the image quality into the next step of almost flawless imagery.

Just like other HD-DVD releases, Universal has added in the Dolby Digital Plus 5.1 Audio tracks which are available in either English, French or Spanish. Considering the DVD release sounded really impressive, all the added Dolby Digital Plus 5.1 adds is even more clarity. Dialogue remains easy and clean to understand while the overall sound effects, from the constant firing of machine guns to the monsters screeching and screaming, sounds like a rapid fan at a rock concert. Check out the final FPS sequence for some a good auditory demo as to the true power HD-DVD can hold. Talk about loud! With Doom marking my fourth overall HD-DVD review title, it seems like HD-DVD, at least to me, is more beneficial for those who want the absolute best audio experience. Doom contains on this positive track.

HD-DVD advertises itself as the best in picture sound and entertainment. The titles released thus far certainly do back this advertisement correctly. What will be interesting to see is if some of the older classics, when they’re released, will improve. As for the HD-DVD release of Doom, I found it disappointing that Universal decided not to create any new HD-DVD exclusive features. I can only recommend Doom, the HD-DVD release only, to those who, for some reason, really enjoy the film and want an improved picture and a near flawless audio track.

Buy this HD-DVD at Amazon