Pixar film WALL·E gets a Criterion 4K in November 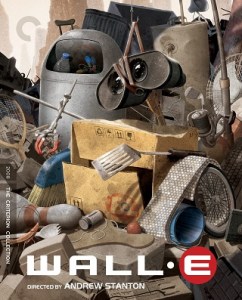 The 2008 Disney / Pixar film “WALL·E” is officially getting a 4K UHD Blu-ray release on November 22nd via The Criterion Collection.  This is the first collaboration between Disney/Pixar and Criterion and is not to be confused with the previously [Disney] released 2020 4K UHD Blu-ray.  This release features a different and new 4K presentation as well as sound mixes, which were all approved by the film’s director.

The film, directed and co-written by Andrew Stanton, won an Academy Award for “Best Animated Feature Film of the Year” in 2009.  It also featured the visual talent of Fred Ward and the voice talent of Jeff Garlin.

As mentioned, this comes from a new 4K scan of the film which was approved by Andrew Stanton.  Tech specs for the 4K UHD Blu-ray include a 2160p video presentation in the 2.39:1 aspect ratio with HDR10, Dolby Vision, and HDR10+ forms of high dynamic range as well as Dolby Atmos and lossless DTS-HD Master Audio 5.1 surround and 2.0 Stereo sound mixes.

The 3-disc set will come in the form of a “combo pack” with the Blu-ray Disc counterpart [featuring the new transfer of the film] as well as a second Blu-ray for extras.  No digital copy of the film will be included, like with the previous Disney release.  You can now find the Criterion 4K UHD Blu-ray available for preorder over at Amazon and directly via the Criterion website.  The bonus materials in terms of physical and regular extras included with this release are fully detailed below.