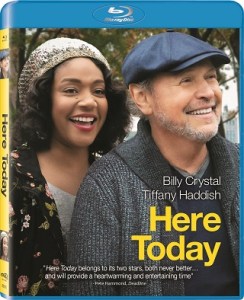 Tech specs for the Blu-ray include a 1080p HD video presentation in the 1.85:1 aspect ratio with DTS-HD Master Audio 5.1 surround sound.

UPDATE: The Blu-ray can now be found available for preorder over at Amazon.

Further below, after the break, you can find the trailer and full announcement about the home video release of this film.

ON BLU-RAY™ AND DVD AUGUST 3

When veteran comedy writer Charlie Burnz (Billy Crystal) meets New York singer Emma Payge (Tiffany Haddish), they form an unlikely yet hilarious and touching friendship that kicks the generation gap aside and redefines the meaning of love and trust.

Inspired By the Short Story “The Prize” By: Alan Zweibel