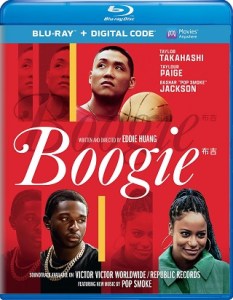 The 2021 film “Boogie” is officially coming to Blu-ray Disc on June 1st via Universal Studios Home Entertainment. The film, written & directed by Eddie Huang, stars Taylor Takahashi, Taylour Paige, Pamelyn Chee, Perry Yung, Domenick Lombardozzi, and the late Bashar “Pop Smoke” Jackson. The tech specs for the Blu-ray include a 1080p HD video presentation in the 2.39:1 aspect ratio and DTS-HD Master Audio 5.1 lossless surround sound on a BD-25 disc. The release will come with a digital code (copy) of the film. You can now find the Blu-ray available for preorder over at Amazon, Best Buy, and Target. The bonus materials set to be included with the release are listed below.

Further below, after the break, you can find the trailer for the film and the full information about the home video release.

THE INSPIRING STORY STARS TAYLOR TAKAHASHI,
TAYLOUR PAIGE, AND BASHAR “POP SMOKE” JACKSON
AND IS YOURS TO OWN FOR THE FIRST TIME

OWN IT ON DIGITAL MAY 18, 2021
BLU-RAYTM AND DVD JUNE 1, 2021
FROM UNIVERSAL PICTURES HOME ENTERTAINMENT

Universal City, California, May 11, 2021 – From acclaimed writer, producer and restauranteur Eddie Huang (“Fresh Off the Boat,” “Huang’s World”) comes a rousing and inspiring New York story about basketball, young love, fractious families, and pursuing big dreams against all odds in BOOGIE, available to own for the first time on Digital May 18, 2021 and on Blu-ray™, DVD and On Demand June 1, 2021 from Universal Pictures Home Entertainment. Showcasing a breakout performance by first-time actor Taylor Takahashi, who was Huang’s personal assistant at the time he was cast, BOOGIE also features a diverse and eclectic supporting cast including Taylour Paige (Ma Rainey’s Black Bottom), Pamelyn Chee (Princess of Nebraska), Domenick Lombardozzi (The Irishman), and the late rapper Pop Smoke, in his first screen performance.

“A sharp, honest story of hoop dreams” (Tim Grierson, Screen International) inspired by and deeply rooted in Huang’s own experiences growing up as the son of Taiwanese immigrants in Orlando, Florida, BOOGIE on Blu-ray™, DVD and digital features never-before-seen bonus material including a behind-the-scenes piece with Takahashi and Huang discussing their unique relationship as well as a look at Pop Smoke’s contributions to the film, taking audiences deeper into the timely, culturally relevant and intimate journey of a gifted young Asian-American basketball player looking to take his game to the next level.

“A confident feature debut” (Teo Bugbee, The New York Times) from multi-talented powerhouse Eddie Huang, BOOGIE is the coming-of-age story of Alfred “Boogie” Chin, a basketball phenom living in Queens, New York, who dreams of one day playing in the NBA. While his parents pressure him to focus on earning a scholarship to an elite college, Boogie must find a way to navigate a new girlfriend, high school, on-court rivals and the burden of expectation.

Paying homage to the Brooklyn Drill sound that he helped to popularize, Pop Smoke’s legacy lives on through the BOOGIE soundtrack which features new original music by the Grammy® nominated artist and is available now on Victor Victor Worldwide / Republic Records.

With the purchase of BOOGIE on disc or digital, fans are eligible to earn points towards special rewards via the Universal All-Access Rewards program. Members can redeem their points for digital movies, signed collectables, box sets, win exclusive prizes and more! For FREE registration and details please visit www.MyUniversalRewards.com.