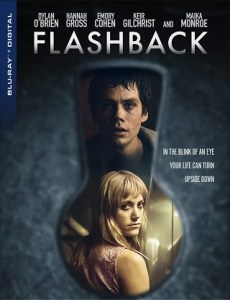 The 2021 film “Flashback” written & directed by Christopher MacBride is officially coming to Blu-ray Disc on June 8th via Lionsgate. The film stars Dylan O’Brien, Maika Monroe, Hannah Gross, Emory Cohen, and Keir Gilchrist. The tech specs for the Blu-ray release include a 1080p HD presentation in the 2.39:1 aspect ratio with DTS-HD Master Audio 5.1 surround sound on a BD-25 disc. The release will come with a digital code (copy) of the film. You can now find the Blu-ray listed as available for preorder over at Amazon. The bonus materials set to be included with the release are listed below.

Further below, after the break, you can find the trailer for the film and the full announcement regarding this release.

SYNOPSIS: Fredrick Fitzell (Dylan O’Brien, The Maze Runner franchise) is living his best live ― until he starts having horrific visions of Cindy (Maika Monroe, It Follows), a girl who vanished in high school. After reaching out to old friends with whom he used to take a mystery drug called Mercury, Fredrick realizes the only way to stop the visions lies deep within his own memories, so he embarks on a terrifying mental odyssey to learn the truth. This mind-bending thriller also stars Hannah Gross (Joker) and Emory Cohen (Brooklyn).

English Subtitles for the Deaf and Hard of Hearing