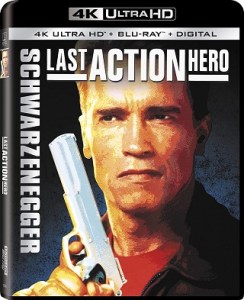 The 1993 action film “Last Action Hero” starring Arnold Schwarzenegger will be getting a standard 4K UHD Blu-ray release on June 15th, via Sony Pictures Home Entertainment, in addition to the 4K SteelBook — also being released a month earlier in May (as previously discussed HERE).

The film, directed by John McTiernan, co-starred Austin O’Brien, F. Murray Abraham, Art Carney, Charles Dance, Tom Noonan, Robert Prosky, Anthony Quinn, and Ian McKellen. The tech specs for the 4K release include a newly remastered 2160p video presentation in the 2.39:1 aspect ratio with HDR10 form of high dynamic range and Dolby Atmos as well as the original 2.0 theatrical mix and a 5.1 surround sound mix. Both of those latter mixes will be in DTS-HD Master Audio format. Below you can find some quoted specific details about this presentation, taken from the press release.

You can now find the standard 4K UHD Blu-ray (coming 6/15) and also the 4K UHD Blu-ray SteelBook (coming 5/18) both listed as available for preorder over at Amazon. The release will come in the form of a “combo pack” meaning that it will include its Blu-ray Disc counterpart and a digital code (copy) of the film. The bonus materials set to be included with this release are listed below.