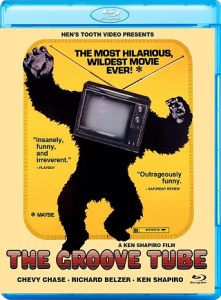 The 1974 cult-classic comedy “The Groove Tube” is finally coming to Blu-ray Disc on May 25th via Hen’s Tooth Video. The film, directed and co-written by Ken Shapiro, starred Chevy Chase, Richard Belzer, and Ken Shapiro. The tech specs for the release include a 1080p HD presentation in the original 1.85:1 aspect ratio from a new 4K restoration, as detailed and quoted below. No word yet on the audio configuration or format.

“Restoration by Gamma Ray Digital from a 4K scan of 35mm archival film materials in the collections of the Library of Congress.”

You can now find the Blu-ray available for preorder over at Amazon. Below, after the break, you can find the trailer for the film and details from the official listing over at HensToothVideo.com.

The Groove Tube spoofs television and commercials in an outrageous series of skits. Lampooning everything from cooking shows to public service announcements, this fast paced predecessor to Saturday Night Live deftly assaults the medium of television itself. Both Chevy Chase and Richard Belzer made their screen debuts in this wild comedy hit.

Comedy, Rated R, 1080p High Definition 16×9 Widescreen (1.85:1). Restoration by Gamma Ray Digital from a 4K scan of 35mm archival film materials in the collections of the Library of Congress.