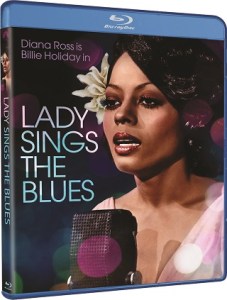 See It on Blu-ray Before the Debut of the Highly Anticipated New Film
The United States vs. Billie Holiday

Diana Ross gives a tour-de-force debut performance as legendary singer Billie Holiday in the classic drama LADY SINGS THE BLUES, arriving on Blu-ray for the first time ever February 23, 2021 from Paramount Home Entertainment.

Nominated for five* Academy Awards®, including Best Actress in a Leading Role for Ross, LADY SINGS THE BLUES brilliantly captures the essence of Billie Holiday, one of America’s most loved and memorable blues singers.  Filled with the greatest songs of the incomparable “Lady Day,” the film won Image Awards for Best Motion Picture, Best Actress (Ross) and Best Actor (Billy Dee Williams), as well as a Golden Globe® for Ross as the year’s Most Promising Newcomer – Female.  Richard Pryor also stars as the unforgettable “Piano Man.”

“ACADEMY AWARD” and “OSCAR” are the registered trademarks and service marks of the Academy of Motion Picture Arts and Sciences.