Lupin the 3rd: The Castle of Cagliostro on 4K in January 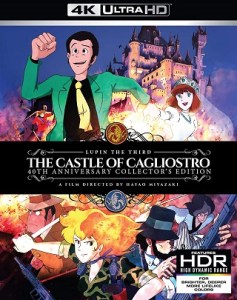 The 1979 Anime film “Lupin the Third: The Castle of Cagliostro” will officially be coming to the 4K UHD Blu-ray format in a “40th Anniversary Collector’s Edition” release on January 26th, 2021, via Discotek Media. The film (AKA “Lupin the 3rd: Castle of Cagliostro”), based on the Monkey Punch graphic novel series, was directed by the legendary Hayao Miyazaki, best known for Japanese animated (Anime) films like “Spirited Away” (2001). The tech specs for the release include a presentation in 4K with HDR10 form of high dynamic range as well as both the original Japanese (with English subtitles) and English Dub audio mixes — in a format yet to be specified. You can now find the 4K UHD Blu-ray available to preorder over at Amazon. The upcoming physical 4K release will include the following bonus materials listed below.