Love and Monsters comes to 4K and Blu-ray in January 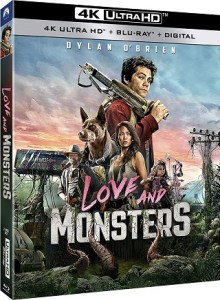 The 2020 film “Love and Monsters” is coming to both 4K UHD Blu-ray and Blu-ray Disc on January 5th, 2021 via Paramount. This news comes both according to a trade ad (pictured HERE) via Media Play News as well as a confirmation direct from a contact at the studio (Paramount). The title hasn’t been officially fully announced, but we have some basic ideas of the details so far. More on that in a short bit. It’s first worth mentioning that this film was directed by Michael Matthews. The cast includes Dylan O’Brien, Jessica Henwick, Michael Rooker, and Ariana Greenblatt.

The 4K UHD Blu-ray will come in the form of a “combo pack” meaning that it will also include its Blu-ray Disc counterpart as well as a digital code (copy) of the film. Meanwhile, the Blu-ray Disc release will come with a digital code (copy) of the film. Tech specs for both versions have not yet been specified, but stay tuned for an update. In the meantime, you can find the 4K UHD Blu-ray and the Blu-ray releases already available for preorder over at Amazon. Finally, so far, you can expect bonus materials to include some of the following, according to the aforementioned (linked) trade ad.