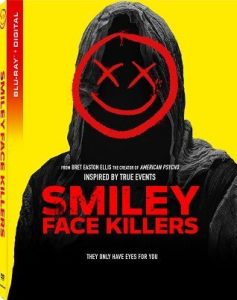 FROM THE AUTHOR OF AMERICAN PSYCHO

Slashing Its Way onto Digital and On Demand, and

on Blu-ray™ and DVD December 8

As a strange wave of mysterious drownings of male college students plagues the California coast, Jake Graham (Rubinstein) struggles to keep his life together at school. Finding himself stalked by a hooded figure (Glover) driving an unmarked van, Jake fears he may become the next victim in the killers’ horrific spree.

Smiley Face Killers was written and produced by author and screenwriter Bret Easton Ellis (novels including American Psycho, The Rules of Attraction, and Less Than Zero). It was directed by Tim Hunter, who in addition to helming the cult classic River’s Edge has directed episodes of some of the most celebrated TV shows in recent history, including “Breaking Bad,” “Mad Men,” and “Twin Peaks.” It was produced by Braxton Pope (upcoming The Card Counter, The Canyons) and David M. Wulf (Inheritance, The Night Clerk).

This must-see film for true-crime and horror fans leaves its terrifying mark on Blu-ray and DVD with revealing bonus features including behind the scenes with the cast interviews.