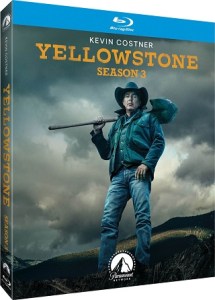 The TV series “Yellowstone: Season 3“ will officially be coming to Blu-ray Disc on December 8th, via Paramount. The show, as seen on the Paramount Network, created by Taylor Sheridan & John Linson, stars Kevin Costner, Luke Grimes, Kelly Reilly, Wes Bentley, Cole Hauser, Kelsey Asbille, Brecken Merrill, Jefferson White, and Gil Birmingham. The tech specs for the release include 1080p HD video in the 2.00:1 aspect ratio and Dolby TrueHD 5.1 surround sound, spanning across a 3-disc set. The Blu-ray is now available for preorder over at Amazon. The bonus materials set to be included on the release are discussed below, taken from the press release.

“[…] over four hours of special features including a never-before-seen featurette detailing the making of the season with inside looks from Kevin Costner and Taylor Sheridan; an exploration of the series with director Stephen Kay; and an interview with special effects supervisor Garry Elmendorf about his team’s work on the show.”

Further below, after the break, you can find the full announcement regarding this upcoming Blu-ray release of the third season of this show.

“YELLOWSTONE” continues to be a huge hit with viewers, with the third season finale setting a new series record and becoming the #1 most-watched cable telecast of the year and the most watched cable telecast since the “Game of Thrones” series finale in May 2019.  The show has been renewed for a fourth season on Paramount Network.

The “YELLOWSTONE” Season 3 three-disc Blu-ray and four-disc DVD sets offer all 10 hour-long episodes from the third season, plus over four hours of special features including a never-before-seen featurette detailing the making of the season with inside looks from Kevin Costner and Taylor Sheridan; an exploration of the series with director Stephen Kay; and an interview with special effects supervisor Garry Elmendorf about his team’s work on the show.

Fans can also purchase their “YELLOWSTONE” gear, inspired by the Dutton Ranch and iconic western landscape.  T-shirts are now available on Walmart.com and in select Walmart stores, and at amazon.com/paramountnetwork.  More product will be on shelves in time for holiday shopping – the perfect gift for any fan!

Written and directed by Taylor Sheridan (Hell or High Water), ”YELLOWSTONE” is an engrossing family drama that follows the epic story of a multi-generational family that controls the largest contiguous ranch in the U.S.  In Season 3, The Dutton family is threatened by new foes and lucrative business deals, forcing John (Kevin Costner), Kayce (Luke Grimes), Beth (Kelly Reilly) and Jamie (Wes Bentley) to utilize unexpected alliances and risky measures to safeguard their legacy.  Josh Holloway (“Lost”) joins the cast in Season 3.