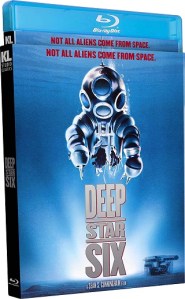 The 1989 film “DeepStar Six“ is coming to Blu-ray Disc on October 13th via KL Studio Classics. The film, directed by Sean S. Cunningham, starred Greg Evigan, Nancy Everhard, Taurean Blacque, Nia Peeples, Matt McCoy, Cindy Pickett, Marius Weyers, and the late Miguel Ferrer. Tech specs for the release have not yet been detailed, however, it is presumed that it will be presented in the 2.35:1 aspect ratio in 1080p HD with a lossless sound mix. You can find the Blu-ray listed for preorder over at Amazon. As of today, KL Studio Classics has officially announced an updated set of bonus materials set to be included on this release. Below you can find a list of those bonus materials, physical extras, and further details.